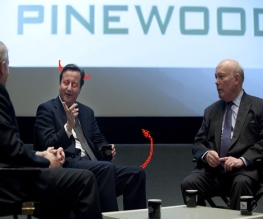 Not content with doing away with our beloved UKFC, it seems that the time has come for British film-makers to buck up their ideas, stop worrying about silly things like artistic integrity and concentrate on making films that can and do entice anyone with a spare 10 quid to hand. Brilliant.

As we watched our rubbery PM – the human equivalent of one of Finding Nemo‘s possessive seagulls – squint his way through government, disenfranchising people to the point where they’d happily saw their way out of his jurisdiction with whatever came to hand, the only solace to be taken is that we can take comfort in our local cinemas for a few hours of quiet escapism whenever it all got too much. Or at least it was.

Not satisfied with sparking riots among hugged-out hoodies, David Cameron has now got it into his shiny bonnet that British cinema simply isn’t lucrative enough in its current state, priced as it is at only £4 billion.

Despite such recent successes as Danny Boyle’s Slumdog Millionaire, Chris Morris’ Four Lions and this year’s The King’s Speech (not to mention the unprecedented impact of the Harry Potter franchise), Cameron apparently still feels the need to interfere. Not content with merely abolishing the UK Film Council, the Prime Minister yesterday made an announcement at Pinewood Studios in advance of Lord Smith’s imminent review:

“Our role, and that of the BFI, should be to support the sector in becoming even more dynamic and entrepreneurial, helping UK producers to make commercially successful pictures that rival the quality and impact of the best international productions. Just as the British Film Commission has played a crucial role in attracting the biggest and best international studios to produce their films here, so we must incentivise UK producers to chase new markets both here and overseas.”

Now, let’s skirt past the fact that he is addressing producers as opposed to directors, lest we go mad at the very thought of a British Jerry Bruckheimer, and focus instead on Cameron’s push for “commercially successful pictures that rival the quality and impact of the best international productions”.

Sure his mouth may say quality, but his eyes are clearly marked with bulging pound signs. Of course the British film industry – or whatever’s left of the British industry by the time Cameron’s finished with it (MINE!) – must continue to aim high if it is to sustain itself, but with The Inbetweeners Movie alone making in excess of £45 million at the box office, the British Film Institute is clearly managing fine without interference from the Eton elite. Yes, we must ensure that we have box offices successes, but that alone should not be the objective of British film-making. The big-hitters that Cameron seems to believe should be our only aim are necessary in order to fund cinema whose objective is not to make money, but to tell stories, to push the boundaries of film-making and to give us art that is worthy in ways not documented on a tax-slip. Putting creative control in the hands of money-spinner producers is the most efficient way of killing cinematic innovation, and this celebration of “entrepreneurship” smacks of just that.

God, you make a film about a politician and they suddenly think they own the place. I can just see it now: The Inbetw33ners 3D, London to Birmingham, Hogwarts Revisited, I’m A Celebrity…Get Me Out Of Here: The Movie and the upcoming Keith Lemon debacle. Morgan Freeman help us.

Previous: Shame
Next: Tomorrow, When the War Began