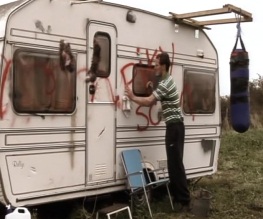 Travellers, a low budget horror thriller, charts the adventures of four ‘city boys’ as they head off to the woods for some rural adventures. Imagine your office team bonding weekend; usually some ill-advised rafting trip where you get to watch your boss try to contain his flesh in a wetsuit. Now imagine if you had a token idiot who defaced a traveller’s caravan with the charming phrase ‘pikey scum’, rousing the murderous anger of some gypsies and leading to a long chase through the woods, and a boxing match in a shed.

The first and most obvious problem with Travellers is the budget. It feels as though Charley Boorman (he of Ewan McGregor and motorcycle fame) swindled them out of all their money in his (terrible) cameo, and the film makers were forced to shoot the rest of the scenes on someone’s camera phone. There’s lots of hilarious slow-mo running through water – like Baywatch, but with considerably less attractive people, and any chase scenes are Blair Witch Project-wobbly. More important than the budget, however – not everyone has Hollywood money – is the plot. Though protagonist Chris (Sweeney) is sympathetic to the travellers, trying to explain their plight as one of them slices his arm open, ultimately the film is really quite offensive to those from a gypsy background. A graffiti-ed caravan, we are led to believe, is reason enough for murder, and there is never a real feeling of why a prank has such horrible ramifications. Travellers is described on IMDB (by director Kris Mcmanus himself) as: “a modern plunge back into the worlds created by movies such as Deliverance.” That’s reaching quite a bit, but the film does have some genuinely tense moments. Unfortunately, they’re let down by a really weird and offensive plot, laughable dialogue, and a budget tighter than Russell Brand’s trousers.