Up In The Air: DVD Review 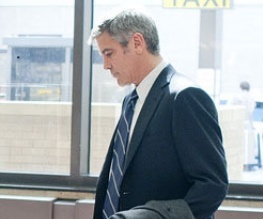 As nice as the rom-com genre is for fluffy, escapist fare at the cinema, it’s rare that we can actually write a review of one that says anything other than “perfectly nice but predictable”. Did You Hear About the Morgans?, It’s Complicated – oh, how many countless January hours we’ve spent ensconced in front of films that kept us entertained enough, but that we immediately forgot about ten minutes after the lights went up.

Enter Up in the Air, the latest romance-comedy-drama from Juno director Jason Reitman, and starring perhaps the most universally idolised and desired movie star of our generation, George ‘Smooth As Silk’ Clooney. The prospect of such a dream team was always going to be a hotly anticipated one, and we’re pleased to report that this is one of those few wondrous instances of a film living up to its press. Up in the Air is intelligent, it’s soulful, it keeps you laughing, it keeps you guessing, and it leaves you with that lump-in-your-throat feeling that you’ve experienced a truly lovely moment in cinema.

Previous: Did You Hear About The Morgans? : DVD Review
Next: It’s Complicated: DVD Review