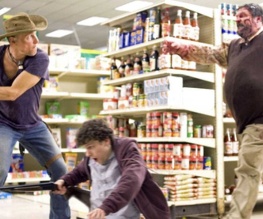 Zombieland comes lurching out of the same genre as that of 2004’s Shaun of the Dead, a film which set the bar for the zomcom, and it set it pretty high. Luckily, Zombieland has still got enough going for it to compare favorably with the yardstick.

Anything You Can Do, I Can Do Deader

The plot concerns Jesse Eisenberg’s Columbus making his way through a zombie-ravaged USA, following certain rules in order to survive – brilliantly presented at the start of the movie as a tongue-in-cheek how-to guide to surviving the apocalypse. Soon enough, Columbus meets up with the bullish zombie-hunter Tallahassee (a career-defining Woody Harrelson), and it’s not long before the two charming dopes are relieved of their transportation and weapons by two opportunistic minxes – hot-to-trot Emma Stone as Wichita and Abigail ‘Little Miss Sunshine’ Breslin as Little Rock – and Tallahassee doesn’t take kindly to being robbed.

One of the film’s most defining characteristics is that it’s difficult to dislike. The pace has got a lot to do with this: at certain points, it’s frantic to the point of dizzying. But simmering away in the background is a knowing, almost gentle approach to the genre. Refreshingly, the film makes no pretence to be either a down-the-line horror film or a smug, all-knowing comedy, instead occupying a well-seasoned middle ground. By doing nothing particularly groundbreaking or controversial, first-time director Ruben Fleischer ensures that you’re not expecting too much, and so the little sparkles of greatness – be it Woody Harrelson’s performance, a joke about Don Quixote or Metallica on the soundtrack – seem to shine all the brighter.

That’s not to say the film is flawless – the script is so by-the-numbers you’ll be ticking it off on your fingers and, considering this is a zombie flick, it seems pretty bereft of our circulatory-challenged friends. The gore’s pretty restrained, and where Pegg and Wright’s masterpiece was witty and charming, Zombieland goes more for balls-out dumbness and frenetic pacing. This isn’t necessarily a bad thing, and it’s both a backwards compliment and a begrudged condemnation when the strapline for the film and a fair review can simultaneously be “It’s Hollywood does Shaun of the Dead” – with everything that entails.

Previous: Motherhood
Next: Is Jen Ready To Take Brad Back?