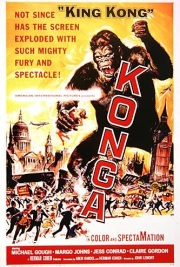 Let’s not discuss the visual effects; this is a 52 year old film. Use the opening scene to get used to this: flames bloom in the foreground while a plane flies in the distance, and we’re given to understand said plane has crashed. Through a series of news reports, the spiritual home of the Department of Backstory, we learn that on that plane was acclaimed botanist Dr. Drecker (Michael Gough) – and that a year after being presumed dead, he’s returned to London. But he’s not alone – Drecker is towing a little munchkin of a chimp, called Konga, and Ugandan insectivorous plants (plants that eat bugs) that posses alarming growth potential…

We are all used to thinly stretched action movies, but nowadays they don’t usually spend this much time establishing their plot holes. Dr. Decker makes an enthusiastic claim of how beneficial making animals grow to giant proportions will be to science, but he never quite says why. Which may not matter, as it quickly becomes apparent that he really just wants Konga to be his personal assassin, but why is that other scientist trying to make animals bigger too?

No mention is made of the fact that Konga starts out as a small chimp, and ends up as a giant gorilla. Dr. Decker takes great pride in his “perfect plan”, seemingly unconcerned with the fact that to commit each murder, he has to drive his (at this stage gorilla sized) gorilla to his victims’ houses or offices in a large, black, suspicious looking van, let him out, and wait for him to climb clumsily back in again. 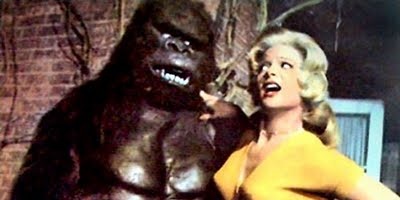 There is little attention given to character, here; we have the mad scientist, the lovelorn spinster (Margot Jones) who never realises that the scientist’s lack of affection is less because he’s dedicated and more because he’s got a mad boner for one of his pretty students (Claire Gordon) and said pretty student’s boyfriend (Jess Conrad), who seems all hapless and nice until he suddenly flies into an ill-explained murderous rage. All other characters appear to exist solely to be victims of Dr. Decker and his monkey.

Most of the film’s flaws can be forgiven, and even embraced as the charms of age, but what really causes Konga to fail is its complete lack of heart. Dr. Decker doesn’t have the naive hope that made Frankenstein’s mad science forgivable, he’s just a cold blooded, power hungry knobhead. And his monster doesn’t have the pathos of a wild animal trapped in an environment he doesn’t understand, for with Konga’s growth comes hypnosis; he is nothing more than a automaton, Drecker’s living weapon, with no personality of his own. 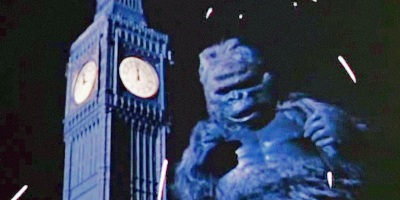 Also in the frustrating column is that fact that no one seems to realise how fun it would be to see an enormous gorilla frolicking around London. Until the climactic scene, which involves Konga standing beside Big Ben for about fifteen years, the story could be filmed in any other city or town or hamlet. Why didn’t he wade across the Thames or feed the birds outside St Paul’s or destroy Oxford Circus tube station or take a dump in front of Buckingham Palace? There are so many lost opportunities here.

Konga could have been a really fun movie, and for the first ten minutes or so, you think it’s going to be. But it soon becomes apparent that no one involved is prepared to have fun with it. So the next time someone wants to let a giant beast roam free through our fair city, I hope they embrace the joy.