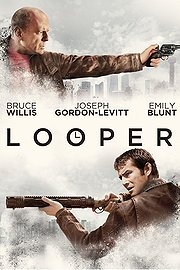 Kansas, 2044, and in the not too distant future little has changed beyond expectation. Ties are back in fashion, not many vehicles fly, and mobile phones have reached their logical extrapolation point; a palm sized touchscreen that looks great, but shatters with one blow.  Developments thirty years further on, however, yield a different story. With time travel invented (but swiftly outlawed), its sole purpose now is for criminal syndicates to dispose of their problems.  Enter Joe (Gordon-Levitt), an assassin whose kills are sent from the future.  Standing at the edge of a remote cane field, he simply waits for his target to appear, shoots them instantly and then destroys the body before it ever existed. “Clean,” Joe explains detachedly, and so it is – until the target is you.

Joe and his murderous colleagues are known as ‘loopers’, and they enter into their contracts with a certain knowledge; in order to prevent your future self spilling the dirt on time travel, one day your loop has to be closed. Kill your future self, collect the pay-off, and then enjoy life until you’re the man being sent back.  But Joe’s future incarnation (Willis) has other ideas.  Escaping execution after his arrival in the past, he goes in search of a future crime lord known only as The Rainmaker – a man whose death Future Joe believes will return him to 2074, able to live out the rest of his days in peace. But with mobster Abe’s (Daniels) gun-toting enforcers on his tail and Young Joe eager to collect his retirement fund, things soon begin to unravel.

A clear cinephile, Johnson has never been one to pretend his work is unaffected by that which has gone before. With his debut, Brick (2005), transposing hardboiled film noir tropes onto a mystery set in modern teenage suburbia, it has always been apparent that the director’s originality is found not in the construction, but in the delivery. Indeed, there is a moment in Looper, where Abe teases Young Joe over his generation’s fondness for ties; “the movies that you’re copying are just copying other movies,” he relates, but such “twentieth century affectations” hardly matter when they are utilised so well.  As events unfold, the film wears its influences on its sleeve, most notably The Terminator (1984), the plot of which it both echoes and subverts, bringing some difficult moral questions to the fore. A deceptively brave approach, it calls not just for the creation of a new landscape, but the transformation of an established one. 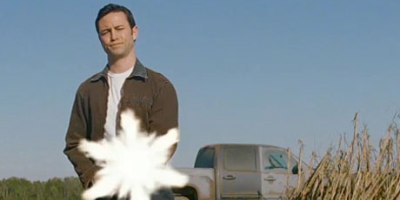 It is something Johnson achieves with gusto.  We’ve all seen time travel films where change in a character’s past creates ripples in their future, but rarely do we see cause and effect taking place simultaneously, let alone witness it utilised as a form of torture as shown in one of Looper’s more unsettling scenes.  Further, with several moments in the script exhibiting wry nods at how modern audiences approach the genre (“If we talk about time travel shit, we’ll be here all day drawing out diagrams with straws”), Johnson practically acknowledges the paradox problem up front, advising viewers not to let over-thinking spoil the fun.  If the story flows, why dwell on the details? Similarly, whilst some films could easily use an entire act explaining the events that turn Joe into his older self, Johnson allows it to be achieved simply through acting, make-up and a montage – one that sums up thirty years of growth in three wordless minutes.  Until time machines really are invented, directors of the world would do well to take note; exposition may get you there, but imagery is by far the fastest way to travel.

Previous: Wreck-It Ralph gets another ace trailer
Next: Best For Film’s Favourite Flicks #5 – The Thing