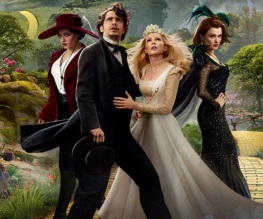 Oz: the Great And Powerful opens with a wonderful homage to Hollywood of old, with a black and white sequence that introduces us to James Franco’s Oscar ‘Oz’ Diggs, a two-bit shyster magician and lothario, touring with a travelling circus. The sequence is quaintly old fashioned, from the mannered performances and old vision of what a circus used to be, right down to the aspect ratio of the screen (which is cleverly toyed with, as certain objects cross over into the black bars at either side). It’s not long, however, before the screen widens and Oz finds himself waking in a world of vivid colour and strange inhabitants. 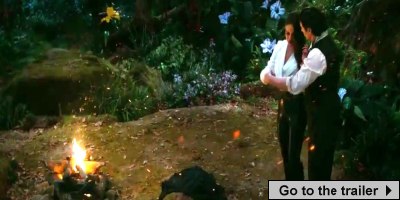 Oz’ arrival in… erm, Oz, finds itself calling to mind a different kind of nostalgia, as the roller-coaster journey – from balloon ride, to tornado, to river rapids, to waterfall and beyond – seems uncannily reminiscent of those early IMAX films, which were devoid of plot, but featured lots of things popping out of the screen at you. It would be unfair to call that Oz in a nutshell but, at times, it veers that way.

What with having the same name as the land they live in, the people of Oz understandably believe Oz to be their saviour. Initially falling in with Mila Kunis’ Theodora and Rachel Weisz’ Evanora, he eventually ends up aligned with Michelle Williams’ Glinda. There’s plenty of misdirection about which is the good witch and which is the bad – the people of Oz themselves are fooled – but most of it’s pretty see-through (Here’s a hint: the good one wears white…) 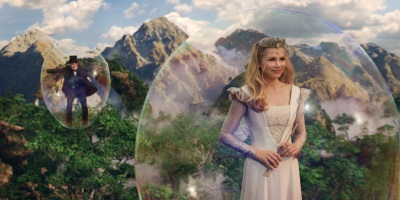 Kunis and Weisz are fine, but it’s Michelle Williams who’s the real stand-out; her good witch Glinda is loveliness personified. Franco, meanwhile, saunters through the film with a knowing grin plastered across his mug, unable to believe he gets paid to plod around magical lands cavorting with beautiful witches. People often say that James Franco acts as if he’s always stoned; in this instance, you could actually believe that this is what he sees when he is.

As this is an Oz film, Franco is joined by some misfit companions along his journey. No lion, scarecrow or tin-man (though all are paid homage to), so instead we have a flying monkey (good version) voiced by Zach Braff, who’s extremely likable whenever Braff isn’t doing his schtick and the great CGI expressions are allowed to speak for themselves, and also a character known only as China Girl. Oz rescues China Girl, voiced wonderfully by young Joey King, and fixes her broken legs. It’s a surprisingly touching moment of calm amid the chaos, and the character design is flawless. China Girl becomes the unexpected, adorable heart of the film. 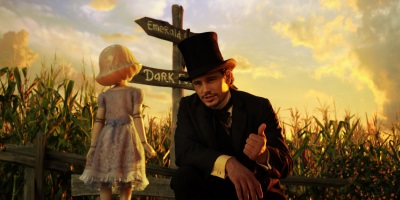 The problem with Oz: the Great and Powerful is that, after the inventive, invigorating opening, things become rapidly inconsistent. Encounters with the myriad wildlife of Oz are forgettable and/or unnecessary, while certain characters disappear completely for very long stretches. Several characters are paid huge lip-service come the end of the film, which is entirely unearned. They’ve hardly featured, we don’t know anything about them, so why are they suddenly part of the family? The genesis of the Wicked Witch is also somewhat rushed, with the reasoning behind her turn to the dark side not quite enough to really justify all of that evil.

Plenty of character actions don’t make a lick of sense, either. Weisz’ Evanora is allegedly a baddie, but appears to be ruling quite benevolently, so why do the people want her out? Come to that, for the most part, Oz is a remarkably unpopulated world. It’s a wonder anyone wants to rule when there appear to be no citizens. At one point, The Wicked Witch blasts her way across the land, forces her way into the Good Witch’s fortress… only to do a bit of weak posturing and then leave again? Surely a truly Wicked Witch might have, I don’t know, set someone on fire? At least the flying monkeys (evil version) are suitably ferocious. (James Franco doesn’t have much luck with apes, does he?) 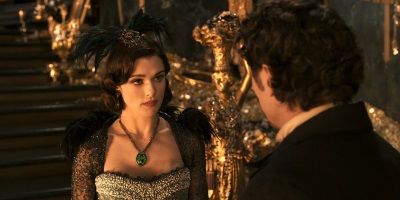 Oz: the Great And Powerful is an extremely unnecessary piece of film-making… but it is a very beautiful one. For all the world it looks like a film Tim Burton should have made, but Sam Raimi has a lighter touch, and keeps things injected with humour and vibrancy, with a nice line in knowing winks to the audience (and yes, Bruce Campbell makes a cameo). Either trimming some characters, or better exploring them would have made for a more streamlined experience, but the superb visuals, some fun performances and a great climax make Oz well worth the investment. It’ll never be remembered as fondly 70 years from now, but, much like its classic forbear, Oz: the Great And Powerful is perfect bank-holiday afternoon fare.