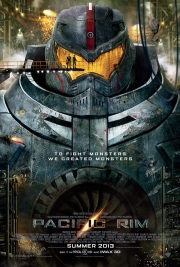 Guillermo Del Toro’s a bit of a cinematic oddity. One minute he’s making sinister Spanish folk tales like Pan’s Labyrinth or fantastic ghost stories like The Devil’s Backbone, the next he’s comfortably riding the Hollywood dollar with flashy action movies like Blade or Hellboy. So, how to approach Pacific Rim, his latest CGI-fest that could more accurately have been titled ‘Sea Monsters vs Giant Robots’? The basic premise is this: prehistoric lifeforms called Kaijus are emerging from a split deep in the Pacific Ocean, wreaking havoc on coastal cities all over the world. The US Government plough all their cash into building huge robots called Jaegers, to be piloted by two psychically-linked super-lads, who will then basically beat up the Kaijus until they sod off.

This is all well and good for a while, but the aforementioned super-lads get a bit big for their giant robot boots, and a Jaeger is only as good as his pilots. Five years down the line the Government don’t think Jaegers are that good anymore – try telling that to Stacker Pentecost (Idris Elba off Luther), head of the Jaeger program, who wants to bust Raleigh out of retirement to fight in a knackered old Jaeger. As he says, “we’re no longer the army, we’re the resistance.”

So yeah, it’s ridiculous. It’s a ridiculous story full of ridiculously named characters (Stacker Pentecost as the head of this program creating life, cmon, may as well be Johnny McChurchy-God) who are all from ridiculous British TV shows (there’s a bloke from Eastenders in it, playing an Australian Laddasaurus Rex). There’s two nerdy scientists, there’s a strained father-daughter relationship, a blossoming romance between Raleigh and young upstart pilot Mako (Rinko Kikuchi off of unfortunately no British soaps / dramas), you name it, all the predictable, stupid things you’d expect to find in this kind of movie. Oh, and it was brilliant. Yup. Totally, utterly, bollocks-out brilliant.

See, not all blockbusters have to be like The Dark Knight, and I feel like the enormous (and deserved) success of Chris Nolan’s summer releases have kind of got everyone’s backs up about what they expect from an action movie now – myself included. Pacific Rim is the anti-Dark Knight, its tongue so far in its cheek it looks like it’s giving a pretend blowjob. The military complex the Jaegers operate out of is called the Shatterdome. RON PERLMAN PLAYS A BLACK MARKET KAIJU COCK DEALER CALLED HANNIBAL CHAU. You’ve just got to go with it, and by Hell does the movie reward you. Rather than being stuttery, blurry and vomit-inducing, Del Toro handles the action scenes as if they’re boxing matches, pulling back wide to see the full range of movement from the Kaijus and Jaegers, allowing us to enjoy the detail of these gigantic monsters at the same time – it’s explosive, bombastic and tons of fun.

Also, how many big budget Hollywood films can claim to have a white guy, black guy and Asian woman as their three leads, and moreover, make no mention of it? We still operate in a cinematic climate where ethnic characters are by and large caricatures, when they’re represented at all. To see such a diverse (and narratively irrelevant) leading cast is hugely encouraging. Similarly, the relationship between Raleigh and Mako doesn’t play out in the traditional Hollywood romantic arc – the fact that they pilot together, and therefore become linked telepathically, informs their development in a more interesting way, culminating in a rather arresting final image.

So yeah some of the dialogue clunks like an old engine, and yeah the exposition is often as subtle as a rhino trying to shag a duck, but this is a movie about giant sea monsters fighting giant robots, and not for one minute does it pretend to be anything else.

Also I think some of it might have been in 3D but I’m not sure. 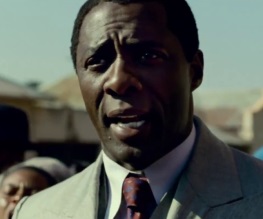