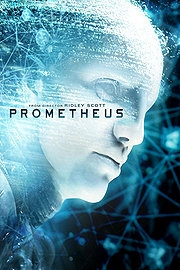 There really is something about Prometheus that, much like a pernicious alien tendril, gets under your skin. From its breathtaking opening – a series of sweeping, panoramic shots of Earth – to its explosive ending, it’s a film that leaves you wanting more, that for better or worse keeps you asking questions. As the end credits roll, you might find yourself frustrated (particularly if you are a huge fan of the original Alien) but you can’t help coming away admiring its lofty ambitions, no matter how slipshod the execution. Elizabeth Shaw (Rapace) and Charlie Holloway (Logan Marshall-Green) are two scientists who discover a series of ancient cave paintings pointing to the existence of a powerful yet benevolent alien race which came to Earth thousands of years ago. Believer Shaw is convinced that these aliens – dubbed “The Engineers” – are the creators of human life and, along with Holloway, she embarks upon a mission to seek out their home world, thousands of lightyears away. Funded by billionaire businessman Weyland (Pearce), Shaw and Holloway are transported in stasis to the planet, along with strict overseer Meredith (Theron), sophisticated robot David (Fassbender), ship’s captain Janek (Elba) and a load of facehugger fodder.

Soon enough, the crew reach their destination and, upon landing on the alien homeworld, discover a series of ancient caverns storing strange containers which resemble giant, extremely sinister (and distinctly oozing) vases. Before long, inevitably, the crew are being picked off one by one and Shaw begins to suspect that her mission was a huge mistake. You think of Alien and you think of a film as clean and bare and stripped as its minimalist setting, the space vessel Nostromo. But Prometheus has none of the tight, elegant simplicity of its predecessor. Replacing the claustrophobic interiors of Alien are the vast, sprawling expanses of the world that the crew of the Prometheus lands upon. In place of cramped, functional quarters are ancient, cavernous rooms, carved in with mysterious symbols and filled with odd objects designed to intrigue and inspire awe.

But somehow, expanding the scope does not equate to expanding the drama or the intensity. Rather, it’s the opposite. The further you travel from the cell-like confines of the ship, the more your attention is allowed to wander, the less you feel rooted in a concrete objective. Making matters worse is the odd pacing, murky characterisation and weak script, dispensing with the effortlessly naturalistic exchanges that made Alien such a success and dwelling on offshoot strands which stall the story at every turn. The worst of these is a back story built around the character of Weyland. Convoluted and oddly pointless, this strand tugs the film away in a direction you don’t really want it to go. Elsewhere, other characters find themselves rushed hastily to convenient conclusions that more often than not leave you cold. Really, the only actor who gets the screen time he deserves is star of the show, Michael Fassbender. From his opening scene – a quiet, controlled sequence in which David patrols the ship alone, his face set in a placid smile while he monitors his sleeping crewmates and watches Lawrence of Arabia – Scott makes it clear that David is directing the events of the film, propelling the action forward. But it is also David who poses a lot of the key questions about the nature of life and creation, making him in many ways – despite his distinctly murky motives – the philosophical heart of the film, the intrepid explorer.

Essentially, David reflects the spirit of Prometheus. This is not a horror, like Alien. It’s a film about exploration and discovery, about the dark side of delving too deeply into the mysteries of the universe. In place of dripping fangs are dripping stalactites; where Alien‘s soundtrack was all creeping dread, Prometheus‘s is all swelling inspirational horns, a tribute to the golden age of space exploration.

In the end, it’s hard to write off Prometheus entirely when its huge ambition is so clearly present. You get the feeling that this was a dream project that became a nightmare. In many ways, Scott resembles his subject matter; a benevolent pioneer who lost control of his own creation, but a pioneer nonetheless.

Previous: Ryan Gosling is battered and bruised in new Only God Forgives pics
Next: Red Tails