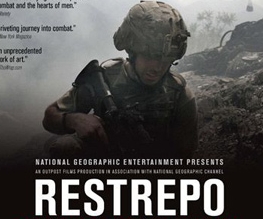 A collaboration between American reporter Sebastian Junger (known for his non-fiction book, The Perfect Storm) and British photojournalist Tim Hetherington, Restrepo is a remarkable achievement. With the filmmakers splitting duties as producers, directors and cameramen, they spent 15 months accompanying the American infantry in Afghanistan’s Korangal Valley, returning with 150 hours of footage that was later edited to run alongside talking-head interviews with those soldiers lucky enough to make it back. With the Korangal once famously described by CNN as “the deadliest place on Earth”, the result is both harrowing and startlingly cinematic.

Keeping its focus on the efforts of a single platoon, the film follows these men throughout an extended tour of duty at Outpost Restrepo – a camp perched defiantly above the “valley of death”, sharing its name with that of a deceased comrade, 20 year-old Private Juan ‘Doc’ Restrepo. Exhibiting a fascinating mixture of chaos and calm, the cameras trace the men’s every move; juxtaposing amazing footage of suddenly errupting firefights (filmed so close-up that we can see a bullet casing drop into a gunner’s shoe), with scenes of everyday horseplay as the men try to distract themselves from the next assault.

Yet whether they are practicing guitar, wrestling each other, or conducting a group rave to Samantha Fox’s “Touch Me (I Want Your Body)”, anxiety is never far away. The weekly council meetings to discuss reparations and job projects with the valley elders are tense enough, but it is the very real prospect of imminent death that haunts the most. Reflecting on his experience, Specialist Miguel Cortez states that he is on at least four types of sleeping medication to deal with his post-traumatic stress. Sergeant Aron Hijar on the other hand is thankful; without the Korangal valley, he wouldn’t know just how good life is when you’re anywhere else.

Restrepo, much like Katherine Bigelow’s fictionalised Middle Eastern account, The Hurt Locker, has been described by many as both apolitical and unjudgmental. Yet, as with Bigelow’s film, it is exactly this lack of opinion that may jar with some viewers. Following the accidental deaths of five Afghan civilians in one attack, Captain Dan Kearney is seen declaring that although he didn’t mean for them to die, they shouldn’t have been connected to the “bad guys”. But whilst such a claim could seem like a desperate justification for camera, it actually seems more like a justification to himself. It may be horrible, but war is what these men know. At another point, one soldier comments that he wishes he could have been closer when killing a man so that he could have “seen him when [he] shot him” – a disturbing comment, no doubt, but in the dynamic of war, one’s focus becomes understandably clouded.

Regardless of politics, the film’s primary concern is humanity itself; a fact supported by the film’s bookend footage of Private Restrepo clowning around with friends shortly before deployment. Showing us an inside view of lives defined by conflict, Restrepo is a captivating study of the comradeship and rationale of men at war. Though unbiased, it ends with the simple statement that in April 2010 the American army withdrew from the Korangal valley. As with the rest of the film, the facts are left to speak for themselves.

Previous: The Death and Life of Charlie St. Cloud
Next: Never Let Me Go