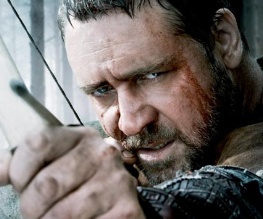 Director Ridley Scott and leading man Russell Crowe reunite for a thunderous new chapter in the legend of everyone’s favourite 12th century pick-pocketer. Shot with Scott’s typical bombast, this Robin Hood juxtaposes spectacular battle scenes with romantic interludes, political intrigue and melancholic flashbacks, all set to Marc Treitenfeld’s rumbustious score. It’s unabashedly macho and predictable with an inevitable battle cry for Crowe to rally the troops into action: Gladiarcher, if you will. No green tights in sight this time around, but it’s still good fun all the same.

Every generation has its own version of Robin Hood. Douglas Fairbanks showed off their legs with pride in the early 1920s, followed by a dashing Errol Flynn with a feather in his cap in the 1930s and Richard Greene in the long-running 1950s TV series. Disney cast a wily fox as Robin in the splendid 1973 animated version before Michael Praed and then Jason Connery portrayed “the hooded man” in the popular ITV series Robin Of Sherwood. More recently, Kevin Costner flexed his bow to Bryan Adams’s (Everything I Do) I Do It For You; and Jonas Armstrong sexed up the Saturday night schedule on BBC One as the eponymous crusader. With each new incarnation, the mythology has been embellished and any historical veracity sacrificed at the altar of artistic licence.

This time around, we see Richard The Lionheart (Huston) has been slain on the battlefield by besieged French forces loyal to Philip. Fearless archer Robin Longstride (Crowe) and his friends Little John (Kevin Durand), Will Scarlet (Scott Grimes) and Allan A’Dayle (Alan Doyle) head back to England. In order to secure safe passage back home, Robin poses as slain knight Sir Robert Loxley (Douglas Hodge) and continues the ruse with the dead man’s wife, Marion (Cate Blanchett), in order that she clings onto the family estate once ruled by the now blind and decrepit, Sir Walter Loxley (Max von Sydow). Over time, Robin falls in love with Marion but any chances of an enduring romance are threatened by double-crossing Godfrey (Mark Strong). Meanwhile in London, Prince John (Oscar Isaac) seizes the throne but quickly make enemies of advisor William Marshal (William Hurt) and his mother, Eleanor of Aquitaine (Eileen Atkins).

Robin Hood is a lively jaunt through Plantagenet history, incorporating the familiar figures of Friar Tuck (Mark Addy) and the Sheriff of Nottingham (Matthew Macfadyen). Crowe’s accent happily roams the British Isles depending on who he is acting opposite (don’t tell him we told you) but Blanchett is luminous with an unshakable Nottingham burr, which adds warmth to some choice lines of dialogue. “I sleep with a dagger” Marion warns Robin when they first meet. “If you so much as move to touch me, I will sever your manhood!”

This is only the beginning

Strong doesn’t overplay his villain, hissing all of the usual orders to kill Robin, with flecks of humour courtesy of the soon-to-be-Merry Men and Addy’s man of the mead-soaked cloth. Screenwriter Brian Helgeland ends with Robin and co exiled in the forest, accompanied by the title card, “And so the legend begins…” We assume that this means if Scott’s film-arrow hits the bullseye of the box office, Robin and Marion will ride again in a sequel. All in all it’s enjoyable enough fun, with Scott guiding us expertly through a rather predictable story like the master he is. Maybe flash us a bit more leg next time, Russ?

Were you merry men coming out of this film? Let us know below…