Nicolas! YOU’VE DONE IT AGAIN. It’s actually quite impressive. Good on you, sir. Your contribution to cinema has gone from bad to worse. After Ghost Rider: Spirit of Vengeance, which made its predecessor, Ghost Rider, look like flippin’ Shaft, we honestly didn’t think you could get any badder. But this isn’t even “ha ha” bad, Nic. I hope you can pay off your debt from all those saber tooth tiger skulls and pyramids of death you have purchased soon so you can stop making soulless, predictable, boring nonsense that fail at the box office anyway. Just some friendly words of advice. " /> 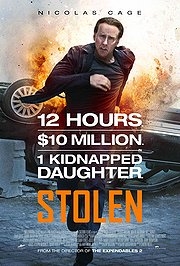 Stolen is an forgettable, unoriginal action thriller by numbers. If you’ve already seen Taken, you can safely skip over the synopsis as you’ll already be all-too-familiar with the dad-desperately-trying-to-save-his-kidnapped-daughter premise. That’s right, the plot is STOLEN, or you might say, TAKEN (because, weirdly enough, they mean EXACTLY THE SAME THING) from a whole other film. Just take Taken, dramatically slow down the pace, eliminate any feelings of tension, dumb it down, stick in a load of continuity errors and slap-dash film-making, replace Liam Neeson‘s various facial expressions with Nicolas Cage’s gormless glaze and TAH DAH! you get Stolen.

Stolen begins with a clumsy, halfhearted attempt at a tense opening. Will Montgomery (Cage) is a hardcore jewel thief, who we’re supposed to see as a tough guy with a sensitive side because he speaks in a baby voice to his daughter on the phone. He’s in a van outside a diamond store preparing to steal a hefty ten million with his gang of stereotypes: there’s Vincent (Josh Lucas), the side-kick with the not-so-subtle sociopathic streak, the sexist, leery guy (M. C. Gainey) who speaks only in innuendo and the hot but personality-less female (Malin Akerman) who’s meant to be all straight-talking strong-willed but comes out as wooden and two dimensional.

Unbeknown to Will, the gang are under surveillance by the FBI, who have the diamond store surrounded and are ready to catch them in the act. Just as Will expertly picks the lock of the safe the FBI break down the door and swarm in. BUT, WHAT THE? WILL ISN’T THERE! HE’S ACTUALLY BREAKING IN TO THE SAFE NEXT DOOR!! He’s so damn pesky! (this is a revelation anyone would have seen coming a mile off). Will and Vincent are almost back to the van with their winnings when Vincent goes all psycho and insists he must shoot an old janitor in the face. Adopting the classic likable anti-hero role, Will stops running and wrestles Vincent to the floor, exclaiming that they’re “respectable jewel thieves not murderous criminals!” This delay shoots them both in the foot – Vincent literally and Will metaphorically – because, while Vincent manages to limp away, Will (after a B Movie car chase) gets arrested. But what the hell happened to the ten million..? 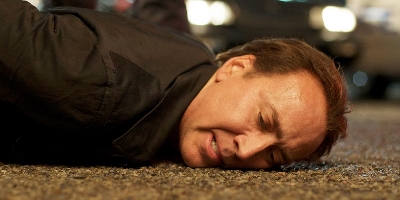 Eight years later and Will is out of prison. His first point of call is desperately trying to reconnect with his, now teenage, daughter. This is clumsily portrayed by him buying her a big horrible blue teddy and her throwing it in his face and shouting “I’m not five anymore, DAD!”. In other bad news, after his best buddy Will went to prison, Vincent went over to the proverbial ‘dark side’ and got killed… OR DID HE??  There’s a crazy, one legged dude who looks suspiciously like a mixture of Vincent and a deranged Kurt Cobain. He’s got one leg, missing fingers, a chip on his shoulder and a certain someone’s DAUGHTER TO KIDNAP for a certain TEN MILLION DOLLAR RANSOM. From this point on there’s this vague feeling of a ‘race against time’ and all that sort of stuff.

This isn’t even a good excuse for some leave-your-brain-at-home fun. It’s just a soulless replica of what has already been. Poor Nicolas, his reputation proceeds him and it’s almost impossible to take this guy seriously – he attempts his serious acting face and it comes out being quite funny. Vincent is ridiculously unbelievable as the film’s baddy. It is probably very difficult not to overact when you’re playing opposite Nic, but Lucas takes this to a whole new level. The script is also absurd, Vincent is incapable of saying anything that sounds like its coming out of the mouth of a real human being, at one point he says, “This is an ace boon swipe, Gum, there’s not another one of these in the headlights for a long while” (what does that even MEAN?) and, when he’s really happy with how his evil plan is going, he exclaims, “I was a golden boy, doll face! Now I’m freakin’ Picasso!” 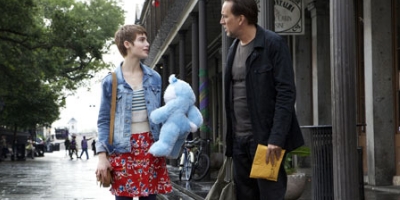 After Stolen, which had a budget of $35 million, grossed an embarrassing $304,318 on it’s first weekend its been axed from most cinemas in the US and is destined for a largely straight to DVD release. FOR GOD’S SAKE NICOLAS! GET YOUR ACT TOGETHER! DON’T MAKE ME COME OVER THERE…