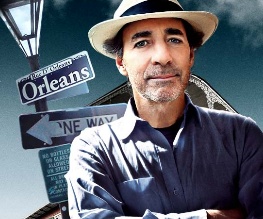 When Hurricane Katrina hit the USA on the 29th August 2005, the world watched as an international disaster unfolded. The coastal states of Mississippi and Louisiana were utterly submerged by the resulting floods, and New Orleans was left devastated; with over 80% of the city left underwater, over 1500 deaths and thousands of homes utterly destroyed. While rescue teams scrambled to rescue citizens stranded atop their roofs, the international press exploded with one phrase – “natural disaster”. The US government was quick to seize the mantra, and within hours it seemed decided around the world that such a terrible accident was unforeseeable, unimaginable and, most important of all, unpreventable. Harry Shearer’s documentary, The Big Uneasy, tells a very different story.

Using first-hand accounts, some deep technical analysis and video testimony, The Big Uneasy gradually uncovers the truth about the flood prevention measures taken before and after Hurricane Katrina. When the floodwalls collapsed on August 29th, it was assumed that the floods had overtopped the levee walls, making prevention impossible. This, as The Big Uneasy shows us, was not the case. The water never hit the tops of the walls. The hundreds of deaths in New Orleans were caused by defects in the levees themselves, defects that, most harrowingly of all, still stand in the floodwalls that protect New Orleans today. It takes surprisingly little time for us to get used the fact that funny-man Harry Shearer (aka Derek Smalls, obviously) is our guide to this harrowing account, and his passion for the project shines through with every word he utters. The same, however, cannot be said for John Goodman, who inexplicably pops up every so often to satirically introduce discussions so ridiculous (“why don’t you just move New Orleans?” being one) that it feels like they’ve been tacked on in case a stupid person happens to stumble into the cinema and doesn’t know what any of the movey-pictures mean. Not only are his faux gameshow host stylings bizarre and distracting, they’re just completely unnecessary for an audience that just wants to get back to the meat of the matter, not smile wryly about a joke they don’t get.

Minor distractions (and a few bizarre music choices) aside, The Big Uneasy is essential viewing, not just for those interested in the Katrina disaster, but anyone who wants their eyes opening about an ongoing political scandal worth billions of dollars and potentially thousands of lives. It’s by no means a comfortable watch, but its a story that must be told.

Previous: Judo Flop! Kevin James to star in another mediocre sounding comedy.
Next: No frills film? Or a 3D, widescreen, snacks-a-plenty cinema experience?