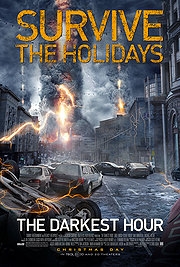 Everyone loves crap sci-fi – it’s genuinely hard not to wring some level of enjoyment, no matter how masochistic, from a properly dreadful alien film or some really unforgivable cardboard spaceships. In a way, it’s a perverse sort of achievement to spend $40m on a sci-fi film so utterly lifeless and forgettable that you’d struggle to enjoy it when drunk, but first-time director Chris Gorak and thrice-cursed producer Timur Bekmambetov seem to have managed it. Nice work, guys. Ben and Sean (Hirsch and/or Minghella, no idea which way round they go) are men on a mission, if by ‘men’ you mean ‘kids who can’t wear jackets properly’ and by ‘mission’ you mean ‘desperate attempt to flog their stupid find-a-party app to some credulous Russians’. Unfortunately, when they arrive in Moscow to deliver their big pitch they discover that an unscrupulous Swede (Joel Kinnaman) has ‘borrowed’ and sold their idea. “Guys, you should have sent across an NDA!” oozes the Swede. “What’s that, a NON-DOUCHEBAG AGREEMENT?” explodes Ben or Sean, effortlessly disposing of the closest thing this film has to a witty line.

Disillusioned and drunk, the boys end up in a swanky bar with two fellow foreigners, Natalie and Anne (Thirlby and/or Taylor) and – wouldn’t you know it? – the Swede. Their night’s starting to look up, until it’s rudely interrupted by a city-wide blackout accompanied by pretty floating balls of light descending from the sky. Floating balls of light which reach the ground, disappear and then start disintegrating people. Bummer. The only five people we know the names of hide in a kitchen for AGES, before eventually emerging to find Moscow (and the world) being systematically strip-mined by clumps of static electricity with attitude. Fortunately, they meet a crazy engineer and a bolshy little girl and some post-apocalyptic soldiers and a submarine and that, then they find out how to zap the aliens (shoot them with a microwave, or something) and although most of the characters – who cares which? – die, the two people who look most like they might shag are alright in the end. Cue credits. Probably the most entertaining moment in The Darkest Hour is when an unsuspecting dog is vaporised; it does do quite an amusing yelp, but basically the humour derives from the fact that you’re watching an animal die. Forty minutes in to what will unquestionably be the darkest hour and a half of 2012, you’re so desperate for stimuli that – and I really must stress this – you will actively enjoy watching a dog get killed.

The cast, which is utterly forgettable and (despite producer Timur Bekmambatov’s best efforts) as American as virtually everything else in the film, painstakingly limps through a script as desolate and degraded as post-apocalyptic Moscow, dodging some of the more brutal linguistic assaults but generally rolling with the punches of talentless and sadistic screenwriter Jon Spaihts. Extraordinarily, director Chris Gorak (who was previously Art Director for films including Minority Report and Fight Club) doesn’t even pay much attention to the film’s aesthetic, with 3D so jarring I couldn’t believe it wasn’t added in post (it really wasn’t) and aliens which, once they’re finally revealed, look like The Matrix‘s Sentinels as drawn by Michael J Fox.

The action falls flat (nobody wants to watch a Swede shoot a shimmer in the air) and the obligatory romantic subplot is just as bad as you’d expect. A couple of the minor Russian parts are quite good – I liked the hard-as-nails soldier turned anti-alien guerrilla particularly – but the actor could no more hold back the torrent of shit sweeping across the landscape than could his character. It’s as if the crappy invisible aliens started off their consumption of Earth’s energy reserves by draining all the bioelectricity from everyone involved in this film and leaving them functionally braindead. The Darkest Hour isn’t well-plotted enough to be sci-fi, scary enough to be horror or entertaining enough to be watchable; early starter Abduction has a new competitor for ‘worst film of the decade’.