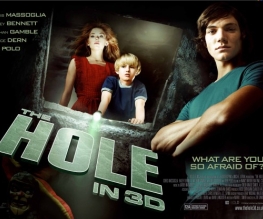 Remember when family films used to have edge? Back to the Future and Jurassic Park were my childhood favourites; movies that, as well as being highly entertaining, also had a realistic amount of bite (especially when the T-Rex munched that guy sitting on the toilet). These films qualified as PGs back in the day, but – for better or worse – society has changed. See them on afternoon TV today and chances are they’ll be mildly censored, but why? ‘Parental Guidance’ means that guardians decide what their children watch, not broadcasters. Heck, Star Wars: A New Hope was rated U and that had a man getting his arm cut off in a bar brawl! Did it affect me negatively? Not half as much as Jar Jar Binks.

Luckily for us, director Joe Dante (the man behind such creepy classics as Gremlins and Small Soldiers) has never been afraid of a little darkness. His latest film, The Hole, literally has a whole bottomless pit full of it. And it’s coming to get you!

When single mother, Susan Thompson (Polo), and her two sons – moody teenager, Dane (Massoglia), and younger brother, Lucas (Gamble) – arrive in the small town of Bensonville, all they want is a quiet life; one free from the troubles of their past. But when the boys stumble across a mysterious hatch in the basement of their new house, they soon find themselves dealing with an entirely new set of woes. Joined by pretty neighbour, Julie (Bennett), the children are determined to find out the mystery behind the hole. The hole, however, already knows their secrets and it is about to confront them with their deepest fears…

A trip down memory lane; in state of the art 3D!

Dante’s approach is a welcome reflection of family films past. From the traditional local nutter Crazy Carl (Bruce Dern), to the retro sound-effects of Lucas’ games-console, The Hole has a feel reminiscent of time when kids were credited with understanding tongue-in-cheek. The children of Dante’s film don’t spout contrived phrases when they’re angry, they call each other “dickhead” and move on. Similarly, there’s no “wowsers!” if somebody takes them by surprise; a brief gasp of “shit” suffices just fine. This isn’t to say that bad language is clever (indeed, the boys are suitably chastised by their mother for using it), but it is refreshingly realistic and positively harmless given that these are the film’s only uses of it. Couple these touches with a sense of humour that will appeal to adults and youngsters alike (“You have a gateway to hell under your house…”, comments Julie, “That is really cool”) and you have all the makings of good old fashioned fun.

Yet The Hole is also innovative. Here – finally – is a film that really has been made for 3D. Whether it’s the nails that fall towards us as the brothers discover the hatch’s bottomless nature, the view from the claustrophobic space under Julie’s bed, or the distorted world Dane finds himself in upon finally entering the hole, Dante’s direction is a masterclass in how to use the technique to maximum effect.

More surprising than all of this, though, is the fact that the film is also genuinely creepy. And with the hole holding the ability to manifest its discoverers’ greatest fears, there’s plenty of scope for range. Spooky clown dolls? Check! A little girl with only one shoe, who shuffles slowly at us through the dark? Oh, yes! It’s like multiple episodes of Are You Afraid of the Dark? all rolled into one. There’s even room to cover hard-hitting domestic issues, with the truth behind the Thompsons’ need to move towns always remaining a threatening presence.

The scares may wane a little in the final act, but with exciting visuals and good natured banter The Hole should have more than enough to keep children captivated. And with the film having been rated with a 12A certificate, the stuffier adults out there will have no right to complain.