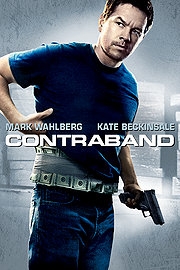 Sometimes Scandinavia just feels like a nerdy kid in a school test, quietly getting all the answers right and then being forced to let the school bully copy them out in his awful scrawly handwriting. Time and again a worthy thriller, drama or horror film trundles from the frozen wastes of Norway (The Troll Hunter), Sweden (Let The Right One In, the Millennium series) and now Iceland, only to be abducted, given a crash course in English clichés and forced to parade in its underwear for a jaded, fat and idly masturbating American audience. That metaphor got a bit confused and shit, didn’t it? Well, so does Contraband. It’s hard getting out of the underworld and making your way as an upstanding member of society, but Chris Farraday (Wahlberg) has managed it – after seeing his father go to prison for smuggling various controlled goods into New Orleans, he eventually abandoned the lucrative but high-risk family profession to become some sort of engineer chap and marry Kate Beckinsale. However, his spectacularly inept brother-in-law Andy (Jones) has no such sense of self-preservation, and carries on smuggling when Chris isn’t looking. In fact, Chris never knows a thing… until Andy is forced to jettison a shipment of cocaine and gets into trouble with local gangster Briggs (Ribisi). Briggs wants his money, and if Andy can’t give it to him then the debt is passed on to his kin.

Chris needs to raise a lot of money – fast – and selling alarm systems really isn’t going to cut it. Ooh, do we think he’s going to come out of retirement for one last job? You’ll never guess, he is and all. ORIGINAL! And once his AA meeting-attending best mate Sebastian (Foster) has sneaked him onto a ship heading for Panama, it’s a fair bet that loads of things will go wrong and be solved by a judicious application of luck, deī ex māchinae and Mark Wahlberg hitting loads of people really, really hard. There’ll also be a grumpy black man, an even grumpier ship’s captain, a goofy sidekick, some fucking mental Panamanians and a last-minute race to get back on the boat before it all goes tits-up. It’s almost as if this is an outrageously overused narrative theme with absolutely no mileage left in it, isn’t it? Funny that. I must confess that I haven’t seen Reykjavík-Rotterdam, the acclaimed Icelandic film upon which Contraband is based – still, that’s okay because neither have you. Oddly enough, Baltasar Kormákur (who played Icelandic Mark Wahlberg in the original) has actually made it across the pond to direct this remake – odder still, he apparently wasn’t too fussed about making the film any good. Perhaps he wanted it to be shit so Hollywood would stop remaking Scandinavian films? Who knows, they’re tricksy buggers – it’s all that reindeer they eat. Smuggling counterfeit money and bags of coke from Panama to New Orleans sounds a lot more glam than running booze from Amsterdam to Iceland, but there’s no way the latter route could have been more boring than Marky Mark’s little holiday.

There may be no lazier film released this year. Contraband sacrifices any shred of motivation, character development, intelligent writing or authenticity in favour of an endless parade of scarcely-connected plot points. Make the best friend a recovering alkie, then he can arbitrarily get drunk and go mental later! Make the fake money guy cock up so Mark has to deal with a crazy mob boss and get roped into a hijack! Slip in a Jackson Pollock painting which gets stolen and then ignored for an hour and a quarter! Completely forget that Kate Beckinsale is an action star in her own right, because she can also scream and flap her silly women’s hands at men with guns when they threaten her dull children! Beckinsale’s the only one with a legitimate grudge here, actually – everyone else is scandalously underwritten and more or less just required to growl and punch, but no character is dismissed half as callously as her utterly pointless stay-at-home wife. I can’t even remember her name. As usual with this sort of film, genre fans will have fun – and, admittedly, you won’t find it a dead loss if you’re dragged along with a slavering Wahlberg fan. The kinetic action scenes are pretty well shot, and it’s impossible to get too bored because SO MUCH HAPPENS ALL THE TIME OH MY GOD… but at what point did we swap genuine plots and things for lines like “You think you’re the only one with a gun?” and “Your wife asked me to pick up some Panamanian dog shit to eat and rub in her cunt, but I ran out of time”? You won’t be able to fall asleep in Contraband, but you’ll probably wish you could.