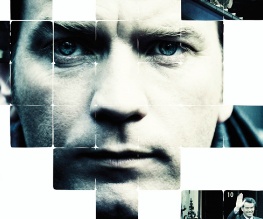 Not that The Ghost doesn’t have its fair share of unintentional laughs: Ewan McGregor’s accent could be an affectionate tribute to Dick Van Dyke in Mary Poppins, and the trail of clues left for his character to unravel the deadly conspiracy is unmistakable. Polanski polishes the lacklustre material and his impeccable style creates the illusion of suspense where our steady pulse tells us there is none.

Former British Prime Minister, Adam Lang (Pierce Brosnan), takes up residence in a remote, state of the art beach house on the American coast, far from the prying lenses of the media. The statesman intends to write his memoirs but when his current ghost writer dies in suspicious circumstances, Lang hires another nameless Ghost (McGregor) to restructure his prose. “What have you gotten me into?” the Ghost asks his agent (Jon Bernthal), when he realises the magnitude of the task at hand. “I’ve gotten you into a quarter of a million dollars” cackles the money man. The politician’s loyal and sexy assistant, Amelia (Kim Cattrall), and his savvy wife, Ruth (Olivia Williams), keep an eye on the Ghost and distract him from the arduous task at hand. “All the words are there, they are just in the wrong order” grins the Ghost, sparking a frisson of sexual flirtation with Ruth.

When Lang is accused of sanctioning torture during his time in office, the Ghost witnesses a category 5 media storm and the subsequent clamour to repair Lang’s reputation. The writer puts his skills to good use, helping Amelia draft a press statement robustly denying the allegations. At the same time, the Ghost attempts to solve the mystery of his predecessor’s demise. “There is no way the current would have washed the body that far west” confides a local man to suitably ominous strains of Alexandre Desplat’s score.

The Ghost is a routine thriller elevated by Polanski’s direction and an A-list cast, who are never stretched. Brosnan channels the spirit of Tony Blair while McGregor flashes his posterior during an emotionally-cold bedroom scene. Tom Wilkinson chews scenery late in the film in a Machiavellian supporting role. The Oscar-winning director orchestrates some terrific set pieces such as the passing of a note from the back of a crowded room to the front. Politics may be a dirty business but Polanski’s film is clinical and precise.

Did you find The Ghost Writer a haunting tale? Let us know below…

Previous: Men In Black are back!
Next: Friday 13th 2 Is Killed Off