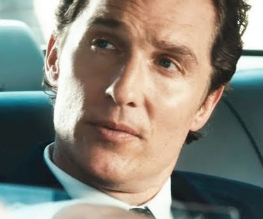 Matthew McConaughey is the charming-jawed king of dreadful films. There are thousands littering his repertoire; go and have a look at his imdb page, it’s like a what’s what of utter crap. The Wedding Planner, Failure To Launch, How To Lose A Guy In Ten Days – they’re all lurking in his past; immovable statues attesting to shit decisions past. Thank God then that he managed to score The Lincoln Lawyer – reminding us all that actually, he can act. Remember A Time To Kill, back in 1996? He was in that. Honestly, he was. And it was good, wasn’t it? It’s all coming back to us now.

So, McConaughey stars as Mick Haller; a quick-thinking, slick-talking lawyer who isn’t too fussy about his clientèle. With his car acting as a make-shift office (who doesn’t want a registration plate that reads “NTGUILTY”?) Mick slides effortlessly from dodgy employer to dodgy employer, taking breaks only to look after his young daughter and flirt good-naturedly with his ex-wife (Marisa Tomei). So when rich-boy Louis Roulet (Ryan Phillipe) comes his way with charges of attempted murder of a prostitute, it doesn’t take much for Mick to accept the case – he’s got the cash, and it seems fairly obvious that the kid has been set up. Along with his faithful investigator Frank (a lovely William H Macy), the supremely confident Mick begins to dig a little deeper in Roulet’s past – after all, it doesn’t matter if he’s guilty, just as long the prosecution can’t prove it. But the more Mick learns, the more uncertain about his client he becomes. Once a firm believer in the justice system, his steps begin to falter as murky discoveries come to light; he begins to question the very principles that keep him in business. And when an old case of Mick’s becomes entangled with Roulet’s, he begins to spiral into a black hole of guilt, shame and paranoia. But he knows that above all, no matter what he discovers, his job is to protect Roulet. It’s not long before both he and the audience start questioning who is really in control here, the lawyer or the client? There’s no denying that director Brad Furman weaves a great yarn, and his unrelenting close-ups and ambitious long tracking shots ensure that we feel that everyone on-screen and off is working bloody hard. McConaughey excels as a cocky gunslinger dragged into a web of double-timing deceit, and every pain-filled crack on his once-glistening face reminds us that a good actor uses age to his advantage rather than shying away from it. William H Macy is equally crinkled and solid as Mick’s go-to-guy, and their warm spark ensures that you’re always on Mick’s side, regardless of his somewhat dubious ethics. Ryan Phillipe too is splendid as the angel-faced defendant; his good looks and easy charm only just masking darker depths lurking beneath.

So we’ve got splendid acting on show and great cinematography to match – what is there to criticise about The Lincoln Lawyer? Sadly, the slightly ropey plot is just always one step behind the performances, and though the twists and turns try hard to keep your heart pumping, it loses its head completely in the final third of the film, leaving you wishing the writers had tightened up the odds and ends some time ago. It’s a real shame, because this had the makings of a deliciously tight, pacy and original thriller. But with so many positive elements it’s still worth a watch, and considering the potential pitfalls of the courtroom drama, there’s relatively little to object to.

Previous: Top ten films which should be remade by Arnold Schwarzenegger
Next: Joel Edgerton among those screentesting for role of Jason Bourne