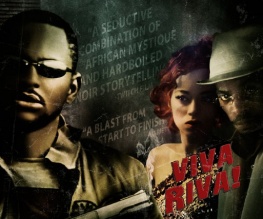 Just the other week, Oscar-nominated director Oliver Schmitz (Life, Above All) was telling us how much he’d like to see more films made in Africa with home-grown talent and crews. Well, it looks like he’s got his wish – but it might not be all he hoped for. Although Viva Riva! has its redeeming features, it’s difficult to get away from the fact that it’s basically ninety-six minutes of guns, tits and barrels of petrol crammed haphazardly into every slum in Kinshasa. Think Drive Angry: Congo Nights.

After ten years in Angola, small-time crook Riva (Bay) is back in his home town of [DRC capital] Kinshasa – except he’s come back with a lot more than he left. Specifically, the things he’s brought home are a) a thirst for a perky young city girl (you would not believe how the man goes on about his requirements re: mammary firmness), b) a truckful of petrol he stole from his gangster boss and c) the selfsame bandito, César (Fortuna), who is hot on Riva’s tail and is determined that nothing will come between him and his gasoline.

Initially unaware that he’s been followed, Riva hits up his old friend J.M. (Alex Herabo) and they get their party on, but as César closes in Riva realises his flirtation with a local gangster’s moll (Malone) may not have been worth the hassle. Will Riva sell the petrol in time? Will César’s unwilling, blackmailed Army accomplice (Longage) manage to evade his clutches? Will J.M. ever actually go home for his dinner? You simply will not give a shit. Viewed purely as a technical achievement, Viva Riva! is quite impressive, with intelligent cinematography and a tense and exciting score belying its meagre budget. Even the gore effects are quite well constructed, which is amazing when you consider how many of them were necessary – I shan’t tell you how many, but a simply hypnotic number of people are beaten, stabbed, shot, burnt, blown up and (memorably) subjected to their balls being twisted REALLY HARD over the course of the film. Unfortunately, that’s pretty much the sum total of its good points.

The largely decent cast does its best, of course, but there’s nothing to work with – whilst I wouldn’t presume to comment on a script that I’ve only experienced through subtitles, the plot reads like the novelisation of any given urban 3PS you can think of. Guns, tits, more guns, bit of arse for variety, maybe a pair of lesbians – why not? – some torture, a club scene, another club scene, a woman pissing on the ground (really), guns, tits, guns, guns, knives and guns. And a fat prostitute getting violently fucked over a table, because God knows obesity and rape are funny in any language. Perhaps the most frustrating thing about the way in which Viva Riva! has been cobbled together is how little effort has gone into developing the principal cast. Riva is a deeply unsympathetic wide boy who abruptly switches focus mid-film to become some sort of nymphomaniac philosopher, before turning positively Zen in the last few minutes. Hoji Fortuna’s crime boss could have been genuinely interesting if he’d had a character fleshed out beyond ‘wear a white hat and shoot people whenever possible’, and leading lady Manie Malone is just another tart with a heart. Viva Riva! is the first feature film appearance for most of the leads, and such insipid roles will be no use at all in getting them more work.

Wikipedia claims that the homicide rate in Kinshasa is a mind-boggling 112 in 100,000, so perhaps the goings-on in Viva Riva! aren’t that far away from the truth. Nevertheless, this crude and brutal film does itself no favours with its gleeful and childish portrayal of the rotten underside of any impoverished city – whatever good is achieved by the welcome exposure it will bring to the Congo’s nascent cinema industry will almost certainly be cancelled out by the unsavoury conclusions which Western audiences are invited to draw from the film’s sordid events.