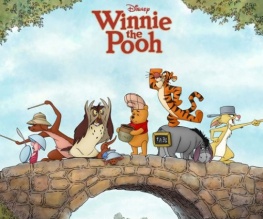 If we ignore the straight-to-DVD spin-offs and dreadful ‘Disney originals’, it’s 34 years since the House of Mouse last released a Winnie the Pooh feature. 34 years is a lifetime (if you’re from Swaziland), and it’s certainly long enough for the children who watched Edward Bear’s antics back in 1977 to have grown up and had children of their own; children who, if there’s any justice, will be taken to the cinema this week to be introduced to an impossibly iconic childhood figure. Despite being in his eighty-fifth year, Pooh and friends have found more than enough oomph to return and delight a new generation with their simple, heart-warming and distinctly 2D adventures. I may have had a little cry.

After Pooh’s sleeping habits are interfered with just enough to make reviewers everywhere question whether or not they dare claim that a metanarrative is in operation, he finally gets up and gets on with his day – a day which, despite the bold allegation in the caption that he begins with his morning exercises, seems more likely to revolve around the need to replenish his ‘huny’ stores. He’s big on ‘huny’, is Pooh. You probably knew that.

There doesn’t seem to be much point in giving a plot synopsis, but know this: Eeyore’s tail has gone missing, and it looks as if Christopher Robin may have followed suit. Meanwhile, Owl is working on his memoirs, Tigger is debating the relative merits of being the only Tigger around (pros: you’re the hero of the Hundred Acre Wood, cons: you will die alone) and Piglet’s busy stammering and/or being outfoxed by Jack-in-the-boxes, as usual. If only there was some sort of gently idiotic chap who could wander through the wood and more or less sort everything out… Winnie the Pooh is absolutely, unstintingly charming for every second of its just-under-an-hour running time. Bereft of the flashy CGI (or, God help us, the 3D effects) which are being used as a substitute for plot or invention in an increasing number of big-budget animations, it felt barely a step ahead of 1977’s The Many Adventures of Winnie the Pooh. Everything’s a bit smoother, and some sequences have a little more pizazz – the cabaret scene in which Pooh hallucinates a world made of honey is a particularly memorable one – but the lovingly traditional approach to the characters feels as hand-crafted as ever it did. The script, which is skilfully woven from five previously unadapted A.A. Milne stories, flows beautifully and doesn’t feel at all cobbled together; the laughs are timeless enough to appeal to adult viewers as well as children, although I probably shouldn’t have been as amused as I was by Piglet’s confusion over the homophones ‘not’ and ‘knot’ (“Can you knot?” “I cannot!” “He can knot!” etc). The mind-bending fourth wall breaches continue throughout, adding a unique and exciting extra level to the story as Pooh’s balloon knocks letters off the page and into the picture or Eeyore accidentally catches a sentence on his unravelling tail. It’s just wonderful; really, really beautifully done. There’s even, in the best traditions of PIXAR, a short at the beginning – The Ballad of Nessie, a pretty little tale with a voiceover by Billy Connolly and a friendly rubber duck. With the sole exception of not worrying that everyone thought I was a paedophile, I couldn’t have wished for more.