I know what you’re all expecting from this. You’re expecting some off-beat, kooky, alternative recommendation about a film you’ve never heard of. Well you’re not going to get it. No sir-ee. I’m also not going to tell you how much I love Titanic (even though I really, REALLY do), or The Shawshank Redemption, or The Green Mile, or [insert other gritty prison drama]. I’m not going to rave about ‘classics’ like Citizen Kane, or The Godfather, mostly because I’ve never seen either of them. Today I am here to celebrate with you the pure beauty and wonder that is The Muppet Christmas Carol. The only film that I watch once a year, without fail, and never cease to love. Nothing in the world warms the cockles of my heart more than the greatest Christmas story of all time told through the medium of singing puppets and Michael Caine. Despite the discerning, embittered cynic I may appear on the outside, The Muppet Christmas Carol reminds me that on the inside I am a warm fuzzy bundle of joy, much like a Furby. Just don’t pull my tail. 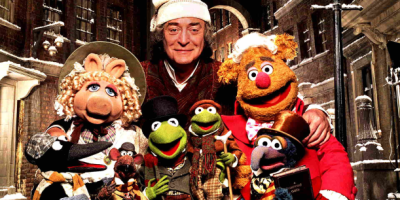 The eminent Gonzo the Great narrates this tale in the guise of Charles Dickens, with much needed comic panache provided by his trusty sidekick Rizzo the Rat, who, as usual, undergoes a series of physical trials in the service of story-telling. Ebenezer Scrooge has never been played with more passion and artistic integrity than he is by Michael Caine. I’m not even being sarcastic. At every point in Caine’s performance he makes you feel for Scrooge, despite his villainous and miserly ways.

The genuine terror expressed at the sight of the Marley brothers’ ghosts, and then those of Christmas Past, Present and Yet to Come, emphasises the conflict between the real and the supernatural. Caine’s warmth and humanity as Scrooge is walked through fond memories, to the moving sorrow and repentance as he desperately clutches onto the vanishing robes of the bone-chilling Ghost of Christmas Yet to Come, is a masterclass in character development. Not to mention the fact that his introductory song is littered with intelligent literary references (“please sir I want some cheese”), imaginative lyricism (“the undisputed master of the underhanded deed”) and universal messages about charity and generosity delivered by talking vegetables.

“No cheeses for us meeses” – I challenge your heart not to melt!

Muppet stalwarts Statler and Waldorf deserve a personal celebration as the Marleys; their ghostly wails and chain-chinking merge the images of childhood nightmares with truly hilarious dialogue and an incredibly well-composed song. Their comic double-act during the instrumental bridges: “There was something about mankind that we loved?” “I think it was their money!”, is set off by the terror they clearly strike into the icy heart of Scrooge. The childlike waif that leads Scrooge through his Christmases Past is suitably eerie and Caine continues to relentlessly tug at our heartstrings as we watch him fall in love with Belle all over again again and then beg not to be shown the Christmas when he lost her.

The dramatic change in tone between these soft scenes of regret and the bombastic embodiment of festivity that is the Ghost of Christmas Present is just one example of the exceptionally varied pace of this film. Children get bored easily and Brian Henson has clearly worked very hard to ensure he never loses the attention of either children or adults. The sight of Michael Caine dancing in a snowy street in the company of a ginger puppet Hagrid still brings a lump to my throat which has nothing to do the vast quantity of mince pies I’ve consumed. This song is probably the most impressive in the film; warming, moving and life-affirming, it reminds us all that the real message of Christmas, regardless of religion or consumer materialism, should be to make the spirit of human kindness last all year.

It IS the summer of the soul in December!!

In the company of the Ghost of Christmas Present, Scrooge is permitted a glimpse into the life of his employee, Kermit the Frog’s Bob Cratchit. Whilst the Cratchit family have the potential to be a bit stodgy and sickening, like too much Christmas pudding, The Muppets are the perfect anecdote to this Dickensian guilt-trip. Miss Piggy’s indignant, nasal shrieks cut straight through the maudlin undertones, and the synchronicity of her “hrummph”s and hair-tossing with those of her twin daughters are moments of exemplary comic timing. Tiny Tim is probably even more of a tragic figure when played by tiny Robin the Frog. The Ghost of Christmas Yet to Come, dressed something like an aged Dementor, is universally terrifying.

Scrooge’s final epiphany comes after scraping the moss off his own uncared-for grave and Caine reaches his acting pinnacle as he tearfully begs the ghost for hope and for an answer whilst the silent figure vanishes into the fog. The contrast between this sorrowful desperation and the sheer relief and joy that spreads across his face as Scrooge wakes up in his own bed, finding he still has time to change, is a beautiful and compelling image. Then comes my favourite moment in the entire film. No, it’s not that bit where Rizzo gets turns into a mice-icle, though that is hilarious. It’s when a repentant Scrooge takes to the streets on Christmas Day and encounters the charity collectors he sent packing at the beginning of the film. At this point he donates a huge sum of money to the poor and, in a show of immense gratitude, the unintelligible Beaker gifts Scrooge his own Muppet-sized red scarf. OH MY GOD, IT JUST MAKES ME WANT TO CRY EVERY TIME!!

Now Michael Caine may not be the best singer in the world, but I just don’t care! Actually, the fact that his voice doesn’t appear to have been doctored or improved at all just embodies the real, honest tale at the heart of this film. The Muppet Christmas Carol is the perfect example of how a celebration that originated as a religious festival doesn’t have to apply exclusively to a specific doctrine or group, it should unite communities in a show of thankfulness, generosity, love, and human compassion. And eating. 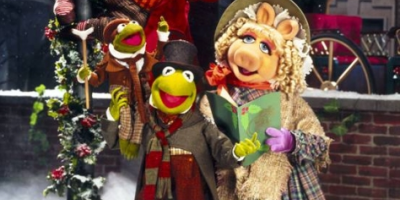 The Muppet Christmas Carol is intelligent, witty, self-referential, and tongue-in-cheek, but it’s also full of feeling, heart and horrendously catchy songs. And it’s as loyal to Dickens’ original text as any version starring Muppets could possibly be. I’m afraid I’m going to have to leave you now because I’m running straight off to watch it. Right now this minute. And I suggest you do the same, then we can meet back here in 85 minutes and revel in the warm, fuzzy glow of love it’s given us. Hug, anyone?