If you’re the kind of odd individual that needs motivation in order to get so drunk you pass out in a puddle of your own waste then look no further. We’ve sifted through every road trip movie there is to bring you a drinking game that is guaranteed to get you slaughtered quicker than you can say “Start your engines.” Who says drinking and driving don’t mix?! 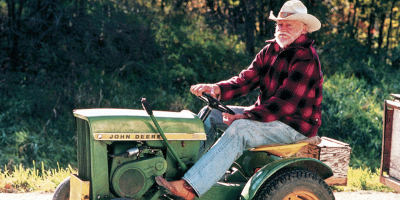 Whenever someone takes a Road Trip in a vehicle surprisingly unsuitable for travel.

A significant amount of road trip films don’t actually feature cars as the vehicle of choice. And we’re cool with that. Cars are a little expected. If we fancied travelling halfway across the country we’d like to think we’re such mavericks that we’d have the moxie to do it on a lawnmower (The Straight Story). Or maybe we’d click our magical ruby red slippers together and they could take us on a journey (The Wizard of Oz) down the longest road ever featured onscreen. We’d at least like to think that if we ever did have to take a road trip we’d have the good sense not to do it in a caravan that needs to be pushed until it reaches 20mph before it can be driven in Little Miss Sunshine. A drink for every weird or unsuitable mode of transport! 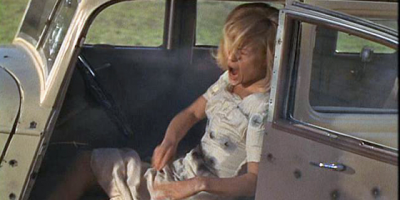 Whenever the Road Trip doesn’t end quite the way you hoped it would.

Part of the fun of taking a road trip lies in the unpredictability of the journey. Once you’ve begun, there’s no telling how it could end. Sometimes your road trip ends with you driving over a cliff to an almost certain death (Thelma and Louise). Or perhaps you, your partner and your car could end up getting drilled with bullets after you inadvertently give yourself away to the cops (Bonnie and Clyde). Or maybe it could end with you having to tell the son you never wanted that you’re a pre-op transsexual (TransAmerica). With so many possibilities on the horizon the thought of taking a road trip has never seemed more appealing! Drink every time the trip turns out to have been on the road to disaster.

Every time somebody’s car gets chased by a menacing truck.
Innocently meandering your way along the road before a faceless truck driver decides to ram you off the road for no apparent reason? (Duel) Whilst we in no way endorse drink-driving here at BFF, now might be a good time to have a few sips of Dutch Courage. You’re most likely going to die so you might as well go out with a bit of a buzz on. 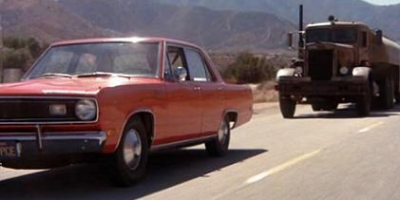 Whenever someone picks up a hitchhiker.

Hitchhiking. Why shell out all that money on driving lessons, vehicles, petrol, etc, when you can simply stick yer thumb and get someone else to do all the work for you? I’ll tell you why; because people who pick up hitchhikers are fucking mental. Take EuroTrip, where Michelle Trachtenburg and co end up in a truck with a woman-stabbing, horse-abusing nutcase. Or Dumb And Dumber, where Mike Star gets picked up by Jim Carrey and Jeff Daniels, who end up KILLING HIM WITH RAT POISON! In fairness, he was going to kill them with it, but that just proves our point. Hitchhiking is mental. Drink everyone someone sticks out an ill-advised thumb. 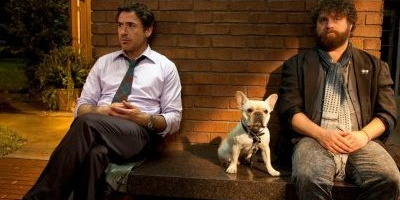 Whenever an animal gets in the way.

GUZZLE IT YOU GAS TANK!

Every time somebody’s souped up ride gets crushed to shit.

If you’re going to steal a car you may as well be hung for a sheep as a lamb, and royally fuck the car up while you’re at it (Ferris Bueller’s Day Off). Failing that, road trips also provide the perfect excuse to see if you can jump that ten-foot gap in the road that’s been calling to you for months (Road Trip). Sure, you’ll completely total the car but your curiosity will be satiated. That’s what really counts. Finish your drink for every vehicle that gets totalled!

By Rayne Wilson and Alex Mullane