It’s rather odd, but despite the fact that Tom Cruise has done a wide variety of films, the same little Cruise-ian motifs keep popping up. With that in mind, this drinking game is tailored to fit any of his 34 films (with a further 5 in production at the moment. He is busy, isn’t he?) We realise that Tom Cruise is, in fact, a teetotaller, so it looks as though we’ll have to drink his share of the booze. We loves ya, Tommy Boy! 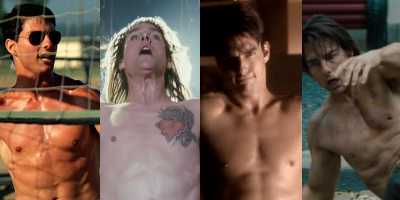 Whenever Tom Cruise gets his tits out.
That’s one sip per nipple. That’s a lot of sips. Despite the fact Tom Cruise has starred opposite some of the most beautiful women in the world, he appears to have a predilection for revealing his antennas. They’re not particularly nice… they just get around a lot. Let’s all toast Tom Cruise’s Brustwarzen!
As seen in: Pretty much everything. Special kudos go to the Cruise missiles in Top Gun.

Whenever Tom Cruise puts on a uniform.
Everyone loves a beefy guy in a uniform, none more so than Tom Cruise. You see him chuck on his academy uniform? Drink! When he’s throwing a hissy fit during court-marshalling procedures? You betcha! You might want to skip the uniform in Valkyrie though, just in case it looks like you’re toasting the Nazis.
As seen in: Top Gun, Born on the Fourth of July, A Few Good Men, The Firm, The Last Samurai

Whenever Tom Cruise is in a sex scene with a woman and neither of them want to be there.
This isn’t saying anything about Cruise’s sexuality, or lack therefore, but his obligatory sex scenes seem to be more about his nipples (there they are again. They do tend to pop up a lot) than any actual intimacy.
As seen in: Eyes Wide Shut, Top Gun, Tom Cruise’s entire marriage to Katie Holmes 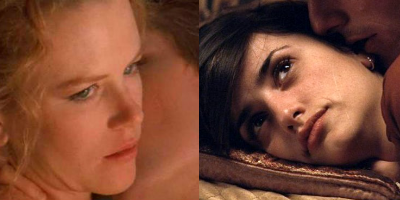 BONUS ROUND! Down your drink every time a former partner of Tom Cruise looks disgusted by his touch! 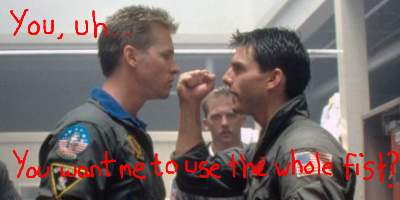 Whenever Tom Cruise shares an intimate moment with a guy.
Isn’t he a dream boat? We all know Tom Cruise is a ladies’ man, but he’s also a man’s man. The kind of guy you could just kick back with, take off your shirt and play some goddamn beach volleyball.
As seen in: Top Gun, The Last Samurai (he Wantanabe’d him some Ken), Knight And Day (Cameron Diaz is a guy, right?), Top Gun (boys will be boys, am I right fellas?)

Whenever Tom Cruise uses some kind of gadget.
He’s such a tech-head! Using a Microsoft Kinect to solve crime in Minority Report, creating a fake wall in Mission: Impossible – Ghost Protocol or, um, using Skype in Tropic Thunder, Tom Cruise loves him some motherboards.
As seen in: Wasn’t Dustin Hoffman a robot that one time? Because if so, Rain Man 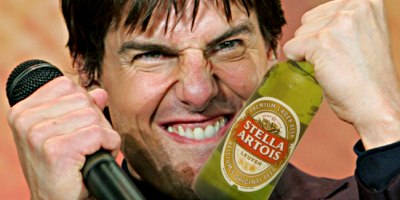 Whenever Tom Cruise shows off those pearly whites with an insane laugh.
He’s got some lovely teeth, doesn’t he? It’s such a shame that a glimpse of them will often be accompanied by a manic, high-pitched squeak. It’s almost as if Jack Nicholson in Tim Burton’s Batman had a cricket bat rammed into his groin. You hear that freaky giggling, you drink!
As seen in: The Color of Money, Mission: Impossible II 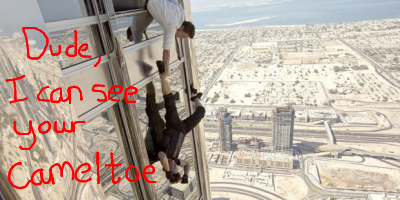 Whenever Tom Cruise looks on the verge of tears.
He’s an sensitive man! Don’t pick on poor little Tommy, he just wants to be loved. Watch him as he stares into the camera and almost, but never quite, breaks into pathetic weeping.
As seen in: Mission: Impossible III is the best example. Phillip Seymour Hoffman is a meanie. 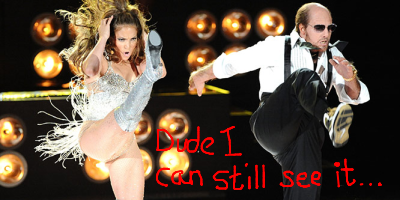 Whenever Tom Cruise gets his funk on and hits the dance floor!
Can you believe the moves on this white boy!? There’s nothing like watching Tom Cruise shake his ass like a stripper. Take three big sips, get up off that couch and follow his lead!
As seen in: Risky Business, Tropic Thunder, Rock of Ages

Whenever Tom Cruise legs it!

Sometimes it’s because of an explosion. Sometimes he’s running to help someone. Sometimes he’s having an existential crisis and the fragility of reality and the human ego is crashing down upon him. Whatever the reason, when he cheeses it you DRINK DRINK DRINK! 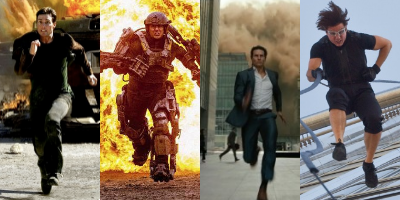 Previous: Desire to Kill
Next: LEGO movie connects with Will Ferrell and Liam Neeson