Top 10 reasons why James Bond is better than Batman

Batman may have swooped into cinemas (and our hearts) with the wildly successful The Dark Knight Rises, breaking box office records and enemy skulls everywhere, but JAMES BOND took the ACTUAL QUEEN to the Olympic opening ceremony. And he’s got a pretty slick new Skyfall trailer too. Which leads us to wonder – which is better? Is it Batman, the troubled Dark Knight of Gotham City? Or is it James Bond, the British secret agent with a license to kill? 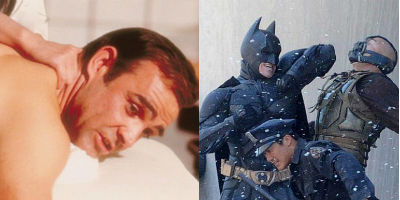 Oh wait – that’s Batman, isn’t it? BATMAN is an expert in martial arts. Well that’s fine. Bond is pretty good at punching people in the face – usually female assassins – so it probably all evens out somewhere along the line…

Well, yes. Fine. Batman has just as many, if not MORE, ingenious gadgets than James Bond. And, sure, the Dark Knight designed most of his inventory by himself. But Bond’s got that cigarette lighter that doubles up as a small explosive. So that’s cool, isn’t it? That’s almost as cool as the Bat Belt. 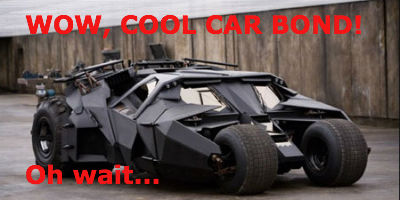 Bond EASILY wins this one with his super sleek, super fast, super awesome Batmo… oh wait. Okay. Yes, Batman has the Batmobile (or the Tumbler, if you’re getting all Nolan on us), which is insanely cool. Let’s not forget that Bond had an Aston Martin that realistically turned INVISIBLE though. For fuck’s sake.

#7 – Bond is better than Batman because… he’s an expert in chemistry, cryptography, psychology, biology, criminology, psychology and all the other awesome -ologies you can think of.

Except he isn’t really. Batman is. Batman is a bloody genius. Bond just fannies around for a bit and eventually notices that one of his hot female sidekicks has died horribly. “Poison,” he’ll say, with a knowing look on his face. No shit Bond. No shit.

Bond endeavours to treat every woman he meets – evil foe or hapless victim – with the utmost respect and… actually, you know what? “You swim very well – for a woman.” Bond, you are an asshole. Batman may be a billionaire playboy, but he at least shows those bitches some respect, goddamn it! Sort your fucking priorities out 007.

This one isn’t Bond’s fault. For the majority of his career, computers didn’t even EXIST (except for that awful Roger Moore in Silicon Valley moment). If he’d been born in the same decade as Batman, we’re pretty sure he’d have at least mastered Twitter and Facebook by now. As well as all those sexy sexy dating sites… 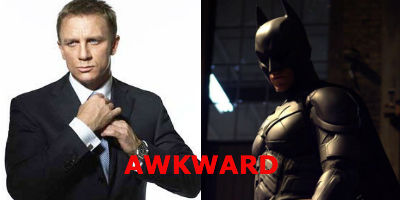 You know what would look EVEN BETTER than that well pressed suit, James? The Batsuit. Super stylish, super mysterious, super awesome – and Bruce Wayne designed that himself. He didn’t just walk into a tailors and smirk at the quivering Russian man behind the till. Batgear beats Armani every single time.

Ha! Bond takes about four seconds to identify with his enemies – it usually consists of him going “ooh, an enemy!”, pointing his gun and shooting that motherfucker in the head. End of story. At least Batman will psychoanalyse the bad guys once in a while – check out his reaction to Harvey Dent and The Joker if you don’t believe me.

When Batman lost the love of his life to The Joker’s evil plans, he realised it was time to make the ultimate sacrifice and paint himself as a villain, to protect the city from a helluva lot of bad press and some negative vibes. He went into hiding. He grieved for eight bloody years. Bond? Bond’s wife died on his WEDDING DAY. In his ARMS. It was HIS FAULT that it happened. And, yeah, there were some tears. Next film, he was shagging someone else.
Asshole.

Well, yeah. We can’t dispute this one; Bond definitely has a lot more sex than poor old Bruce Wayne. But he probably has far more inexplicable rashes, ceaseless itches, off-coloured discharge embarrassments and plenty of dissatisfying oozing than Batman too. The only gadget we’ve never seen Bond pull out is a condom – time to put on a love lifejacket 007, before it’s too late. After all, you don’t want Batman to be the only one left with a working penis now, do you? Exactly.

So, despite our best efforts, it seems as if Batman (aka The Dark Knight), is ultimately cooler than James Bond. Damn it. Which of the two mega men is your number one guy to call in a crisis?