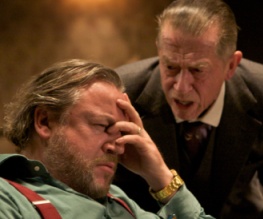 Sneaking under the radar to a cinema near you on December 4th is 44 Inch Chest. Some jaded souls might groan at the prospect of another addition to the long link of Brit gangster flicks, but this is no Guy Ritchie knock-off, oh nosiree Bob. This one’s got pedigree. Breeding, like.

Like a snooker ball in a sock, the script’s coming at us from Louis Mellis and David Scinto, the writers behind Sexy Beast. Ray Winstone and Deadwood‘s Ian McShane, who appeared in 44 Inch Chest‘s underperforming (yet critically acclaimed) predecessor are starring, along with the legendary John Hurt. If it wasn’t cool enough that Hurt’s putting in a performance, his character’s called Old Man Peanut, and we like that. A lot.

It’s a first-time feature for newbie director Malcolm Venville, but with Eternal Sunshine of the Spotless Mind producer Steve Golin on board and a score by Massive Attack, this one has got us well and truly intrigued. It’s the story of a jealous gangster – Winstone – getting a gang of his boys together to take revenge on his wife’s French lover (Melvil Poupaud). If Mellis and Scinto’s script gets anywhere near the razor-sharp profanity of Sexy Beast‘s Don Logan (which won Ben Kingsley a shedload of awards) we’ll be happier than a loan shark with a fresh pair of kneecaps to sledgehammer. The fact McShane told Empire magazine that 44 Inch Chest makes Sexy Beast look like “Mary Poppins” just adds a fat cigar and a speedy getaway to the picture.

Previous: Robert Pattinson’s Life Gets Even Better
Next: Harry Potter And The Stolen Franchise?