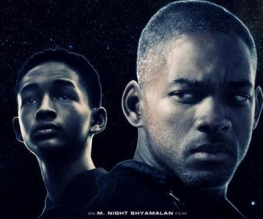 Breaking news on headache-inducing and vaguely condescending methods of film marketing just in: Will Smith + boy-spawn are in on it now. Much like the Omnicorp advertisement for the RoboCop remake, this quasi-viral teaser for After Earth takes on the guise of a third-party brand to lend the promo more weight and legitimacy than those ancient things called posters used to.

Facebook? In 1908? Shyamalan, you are full of shit, sir. Everyone knows it was Thefacebook back then.

Will Smith (Men In Black III) and mini-me Jaden Smith (Justin Bieber: Never Say Never) will be playing a father-son duo who crash land on Earth 1,000 years after everyone else left because of all the rioting and pillaging and looting and rape and locust plagues or whatever. As the teaser shows you, for once, we humans were actually too clever for our good, and thanks to the Raige family getting overenthusiastic with their chemistry sets, we ended up like the GM-orangutans in Rise of the Planet of the Apes and crazied ourselves out of civilisation. Obviously, the next step was to call in Will Smith. If he’d have said no, we’d have been looking at the plot of Ghostbusters III, mark our words.

After Earth is due out in June 2013, and ironically, barely even has a Facebook timeline of its own yet.

Previous: The Rock in talks to play ‘Lobo’
Next: Yet more TV spots for the Dark Knight Rises!