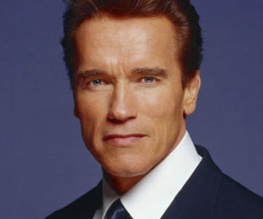 Arnold Schwarzenegger must be a clever man. He must be, right? He was the Governor of California, for crying out loud! That’s an ACTUAL place. So if anyone can explain the science required behind the new Triplets plot, it’s good old Arnie.

As we’ve already reported, the sequel to Twins is currently in development; Arnie and Danny DeVito, mismatched twins from the first film, will discover that they have a THIRD surprise sibling… and it’s Eddie Murphy.

Yeah. That’s happening. So how did Arnie explain the phenomenon when he spoke to Comingsoon.net?

“Physically, there’s no way! Then, somehow, we would explain it. That would be hilarious…”

“But how will we explain the new tax increase to the public?” a trembling aide would ask. The big leather chair would slowly swivel round, revealing Arnie in a suit and sunglasses: “somehow…”

Ah well. WHo needs plot details anyway? Plots are for losers! At least Arnie’s got the poster all sussed out:

“I can see a poster… A billboard with us three. ‘They found another one!’ Triplets! ‘Only their mother can tell them apart!’ I would do that in two seconds, because that’s real entertainment.”

Do you think Triplets sounds utterly mental? We do. We truly, truly do…