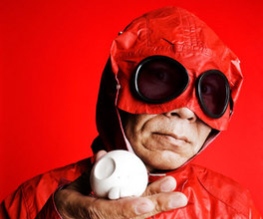 Takashi Miike’s Hara-Kiri: Death of a Samurai did very well at Cannes 2011. Fans and critics expecting it to be a gory mind-messer in the same vein as Visitor Q or The Happiness of the Katakuris, were surprised it turned out to be more of a courtroom drama. Hey – the auteur who directed Ôdishon but also acted in Animal Crossing: The Movie won’t be pinned down, you motherlicking animalcrossers.

Anyway, as a follow up to his film being selected for competition at Cannes, director Takashi Miike has announced his next film project to be the film adaptation of a well-known video game. He told reporters at Cannes that it would be a lighthearted courtroom comedy base on a Nintendo DS game. There’s no point acting surprised that a guy famous for some of the most viscerally brutal scenes ever committed to camera is doing a light family film: I mean, Animal Crossing: The Movie, right?

Further reports have confirmed that the video game in question is to be GYAKUTEN SAIBAN, aka “Ace Attorney”. Gaming cheat sheet: GYAKUTEN SAIBAN was a trilogy of Game Boy Advance games that got a western release for the Nintendo DS. Basically, ‘Ace Attorney’ is a puzzle-solving courtroom adventure game where the player has to solve various cases through investigations and cross-examinations. So there you are. Act like you know.

Takashi Miike is… a law unto himself. We can’t wait.