Austin Powers 4 On The Horizon? 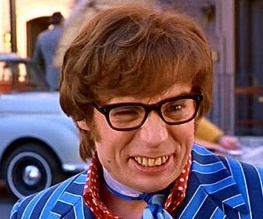 A shagadelic bit of news? Or is it as tired as Austin’s sex jokes? We’re not even sure what we’re feeling about this so far, but we have to admit, we’re intrigued.

According to Jay Roach, the director of all three Austin outings, the time may have come for the International Man Of Mystery to don those glasses once more. He stated

“[Mike is] working on ideas for it, people are definitely talking about it and I’m all good for it,”

If we recall, the third Powers flick ended with Austin and Dr Evil discovering they were brothers, making friends and starting a new life of friendship. The catch? Dr Evil’s son Scott was left cackling in the background as the new big baddie. Could they really have left the franchise there? Surely not!

Frankly, the last three Austin outings have all been funny, ridiculous and gloriously star-studded. We reckon that, in terms of upcoming sequels, we could do a lot worse. Yeah baby!

Would you go to see Austin in his fourth caper? Let us know!