Black Widow may get her own film. Scarlett Johansson’s body to star. 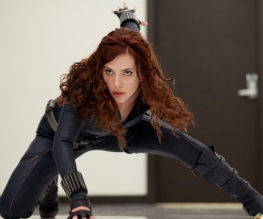 Ah, Scarlett Johansson in Iron Man 2. She kicked, she twirled, she wore a skin-tight jumpsuit! Sure her character (Natasha Romanoff, AKA Black Widow) may have been a blatant walking advertisement for Marvel Studios’ upcoming crossover flick, The Avengers, but wow did she look good! And although Marvel’s Kevin Feige hasn’t yet confirmed that the S.H.I.E.L.D. agent will get her own film, he certainly has given reason to suspect it.

Currently hot-footing his way around America promoting the Iron Man sequel’s upcoming DVD/Blu-Ray release, Feige yesterday announced that Marvel have “already started discussions with Scarlett about the idea of a solo movie and have begun putting together concepts.” However, he was also careful to reassure his audience that “The Avengers comes first.”

Putting aside our desire for more catsuit clad action, it’s fair to say that Feige’s qualification is probably a good thing. We’re not denying that Black Widow has a long and potentially interesting comic book history that could be explored, but judging solely by her contribution to Iron Man 2, we’re not so sure the character has what it takes to carry interest unassisted. The character may have provided moments of comic relief and a treat for rowdy “lads” everywhere, but let’s just be cautious here. After all, nobody wants another Electra on their hands.

Previous: Phoenix comes clean to Letterman
Next: Will Smith to make Justin Bieber movie. This is your life.