Will Smith to make Justin Bieber movie. This is your life. 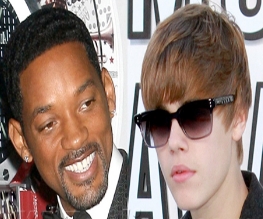 Right, well that’s just taken a great big chunk of happiness out of my morning. Justin Bieber and Will Smith? Film project? Well, quite frankly I don’t know what to say.

I’m sure I’ll find something.

First off, WHAT?? Who in the name of tarnation is responsible for this? There was me thinking that “Bieber Fever” was a playground rumour, like crusts making your hair curl, but is he really set to take over the world? He’s already got more merchandise then you would know what to do with, including a 22″X70″ cardboard cut out (what would you do with that?) and from what? Two albums? I think Michael Jackson released at least three before he was immortalised in cardboard.

And how has this weird and frankly, disturbing collaboration come about? Well, Bieber and Smith met while Bieber was recording the theme to The Karate Kid and apparently the topic just came up. Huh? If I met Will Smith, I think the LAST thing I would want to talk about was making a film about my life. I would be too busy singing at him. “Now this is a story all about how my life got flip-turned upside-down….” I think you’ll find he would be the one asking, no begging to make a film about me.

As much as I am scared about the “Bieber Fever” spreading quicker than the plague, I will probably go see this film when it comes out. Suddenly I feel a tickle in my throat and am breaking into a cold sweat. Dang. I think I’m infected.

Previous: Black Widow may get her own film. Scarlett Johansson’s body to star.
Next: Grosvenor Lock-In Night: The Lord of the Rings