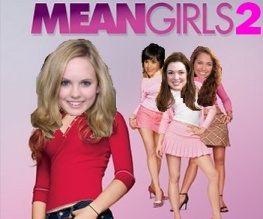 I don’t know if this story actually needs any content other than that contained in the title, to be honest. Mean Girls 2 is happening. Tina Fey is not involved – in fact, the only returning cast member is the school principal – and the story looks like it’s been lifted straight from the original film and then carefully vetted for humour or originality. Four out of four of the starring brats are Disney Channel alumni. It’s going straight to DVD, for God’s sake.

We are NOT impressed. Mind you, there’s some sort of perverse skill involved in actually making us miss LiLo… The trailer’s here, but we don’t recommend it.