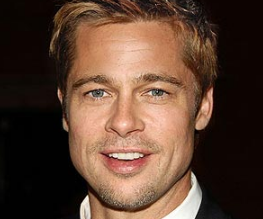 Pfft, who even said you’d get three more years worth of parts, Brad? Yeah OK, it’s unlikely the roles are going to dry up for the most famous actor in the world, but still. No one likes a presumer. The point is, Brad reckons that he’s got three years of Acting left in him, and he’s planning to move behind the camera permanently once that time is up. And have more kids. Seriously.

In a recent Australian interview, Pitt stated that once he’s turned 50, it’ll be time to hang up his performing trousers once and for all: “I am really enjoying the producing side and development of stories and putting those pieces together,” he said, “getting stories to the plate that might have had a tougher times otherwise.” His production company, Plan B, has been involved in quite a few storming films to date: The Departed, Kick-Ass, The Tree Of Life – so we’re not particularly worried about Brad’s future success. Even if their future projects do include a film entitled Cobra The Space Pirate .

He then went on to talk about how great it is to have loads of bloody kids and how having more of them will be fun. Whatever dude, just concentrate on somehow getting Nic Cage in the Kick-Ass sequel, could you?