Cate Blanchett returns for The Hobbit 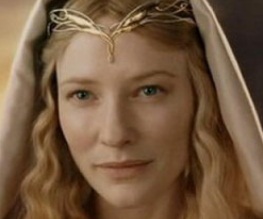 And before you splutter, “but Galadriel isn’t even IN The Hobbit you mad… hideous, I, arrgh” – hush. We know. But frankly, we’ll take a bit of Cate Blanchett where we can find it, thank you very much.

Peter Jackson has confirmed that Blanchett will be reprising her role as Galadriel in the LOTR prequel, though he hasn’t specified how exactly that’s going to work. She was universally swooned over as the beautiful Elven queen in the original trilogy, and with female roles being rather thin on the Hobbit shire ground it seems that Jackson wants to inject a feminine touch where he can. Though Galadriel doesn’t actually appear in the book, it’s difficult to feel sorry about the idea we’ll get to see her again. Jackson has yet to speak about where in the saga Blanchett will pop up, but let’s hope the news doesn’t anger hard-core Hobbit fans. At the end of the day, this is Jackson. If we’re going to trust anyone with a bit of Tolkien creative licence, it’s him.

What do you reckon? A good decision or a slippery slope?

Previous: The Warrior’s Way
Next: Polanski in high spirits as The Ghost dominates EFAs