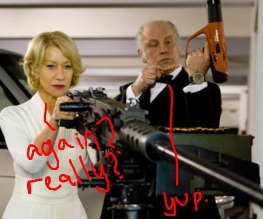 The principal cast of utterly ill-advised sequel Red 2 is apparently complete as Lionsgate prepares to sell the film in Cannes.

Catherine Zeta-Jones and GI Joe star Byung-Hun Lee have joined returning cast members Bruce Willis, Helen Mirren, John Malkovich and Mary-Louise Parker in another attempt to spin money out of idiots who assume that good actors = good film. Nobody who saw the original film will ever believe that particular lie again.

Dean Parisot, whose CV contains such polar opposites as Galaxy Quest (yay!) and Fun with Dick and Jane (kill us, kill us all, sweep the earth bare of our foul spawn), has taken over from the crushingly useless Robert Schwentke as director. Erich and Jon Hoeber are back as writers, worse luck. This is just going to be ghastly, isn’t it?

Previous: Top 10 Presidents in Film
Next: Smurfs 3 rolls into production, for some reason