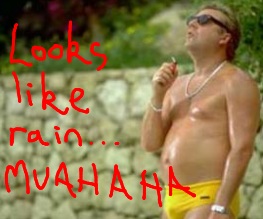 After at least ten minutes’ thought, we’re still not sure who the villain in the story of Noah is. And we went to Sunday school, so you might call us experts. Perhaps it’s clouds, if we’re thinking literally. Or God, if we’re thinking blasphemously.

Noah is also set to star Emma Watson (cast after both Dakota Fanning and Saoirse Ronan declined) as the wife of one of the titular patriarch’s sons, played by Logan Lerman and Douglas Booth. No mention of the third son, possibly because he gets cursed and sold into slavery for looking at Noah naked. We wish we were joking.

Scheduled for release in March 2014, and due to start filming in Iceland and New York this summer, let’s hope that Aronofsky can pull off transforming four-thousand-year-old misogynistic blood and thunder into a fun-for-all-the-family blockbuster. Let’s also really, really hope that Winstone’s villain is the human incarnation of the Flood, wearing a blue sheet over his head and with jellyfish stapled to his shoes. “Noah, you fahkin’ mug!”

What’s the biggest animal on the Ark that you think Ray Winstone could beat in a fight? What if it had mooed at his doris or something? Answers below, or we’ll have your lizard head on a spike.