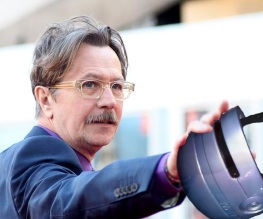 We’ve not been very fussed about the Robocop remake – director José ‘Elite Squad‘ Padilha and star Joel ‘The Killing‘ Kinnaman are all very well, they’re just not exciting. But how about Gary Oldman? Now there’s a name to conjure with – but the best actor never to win an Oscar wouldn’t sully his matchless CV with a sub-Terminator 80s remake, would he?
Yep, turns out he would.

The Tinker Tailor Soldier Spy star has signed on to play Norton, the scientist responsible for Robocop’s creation. We presume the character’s role will be significantly beefier than that of his apparent namesake Bob Morton – Miguel Ferrer’s character from the 1987 original spearheaded the RoboCop cyborg programme, only to be killed when he got in the way of a rival executive.

The Hollywood Reporter rather fancifully claims that Norton will be “torn between the ideals of the machine trying to rediscover its humanity and the callous needs of a corporation”, which smacks of someone who only got into adjectives after they left school but is probably on the money. We’re quietly excited.

Would you let Gary Oldman build you a cyborg body? Obviously you would.