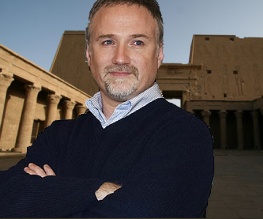 It’s been many long months since Angelina Jolie, she of the asp-stung lips, was confirmed as the star of a forthcoming biopic of Graeco-Egyptian queen Cleopatra. Since then directors have slid around the project as if they were skidding on a bathroom floor covered with careless spillages of asses’ milk (classical references, YO), but nobody’s stayed attached to the project for long.

The last convincing name was Paul Greengrass, but since he’s tied up with a MLK biopic the rumour mill is now alleging that David Fincher could be involved! Now that’d be interesting. A lot rests on whether Fincher decides to make the first sequel of his career and stick around to adapt The Girl Who Played With Fire for a stupid American audience, but we think we’d like to see what a Fincher-Jolie combo could do to the legend of a woman who’s basically synonymous with Elizabeth Taylor and vampy eye makeup.

What do you make of this intriguing not-quite-news? Let us know below!