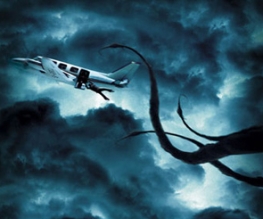 Billed as a supernatural thriller, Altitude follows the misadventures of a rookie pilot (Jessica Lowndes, 90210) who takes her friends on what should have been a short ninety minute flight to a concert in Montreal. An unearthly force jams the plane’s systems. Even as the teens seize control of the failing plane they realise that more than one peril awaits them… for the storm that has surrounded the plane is in itself a malevolent supernatural presence…

The finest thing about Altitude is the talent of director Kaare Andrews, best known for his short films and writing for Marvel Comics. He brings comics sensibilities to his first feature, and – along with the writer – wears his influences on his sleeve. The monsters in the clouds will be well-known to purveyors of Lovecraft’s Cthulhu mythos. Similarly, the entire set-up of Altitude is reminiscent of old-school Twilight Zone, which in itself is no bad thing. Altitude is essentially patchy, fairly enjoyable nonsense. Think of it as ‘teens in the Twilight Zone’ and it’ll match your expectations. The young actors, while nothing to write home about, are adequate to the task. With Jessica Lowndes from 90210 and Ryan Donawho from The O.C., there’s a chance the casting might intiate a built-in core teen fanbase. Something like Altitude is probably the only way to get a 90210 addict to dip their toe in Lovecraft. In the DVD extras, director Andrews said he wanted to place his characters in a supernatural pressure cooker and let the emotional conflicts boil over. The idea of teens at odds with each other in a claustrophobic cockpit is a good one, and Andrews does a solid job of holding the viewer’s attention in film that’s essentially a one-scene wonder. The plot’s Twilight Zone story arc just about manages to balance out the Twilight ‘teens in torturous love’ angle, with an effectively gradual build-up from plane survival to monster survival. The low budget goes a long way in what’s a visually quite slick little number.

The only let-down, really, is the wearying cartoonishness of some of the characters. Still, you can always play “Who gets killed first?” if the irritation threatens to overwhelm.

Previous: David Fincher to direct Cleopatra biopic?
Next: A trip back in time to Narnia