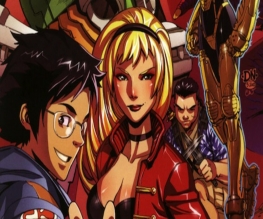 Hot on the heels of the record-breaking success of Avengers Assemble, superhero supermagnates Marvel Entertainment are teaming up with Disney (for the first time since Disney conveniently purchased the company in 2009), to make Big Hero 6, tentatively scheduled for a 2014 release.

Rather than scattered across the east coast of America, this supergroup is united under the Japanese government’s fictional Giri group, and is comprised of several motley individuals such as Honey Lemon, a cartoonishly sexy version of Mary Poppins in that she can pull whatever object she desires from her bag, and Go-Go Tomago, who sadly doesn’t do something snazzy with tomato juice, but goes around in the guise of a  fireball (BORING). Infinitely more ridiculous than the Avengers cohort of Marvel, Disney has wisely pegged Big Hero 6 for a traditional animation production rather than trying to find a way to do anything with CGI other than augment Honey Lemon’s breasts.

Whilst the idea of immortalising lesser known Marvel Comics stars from the 90s is adorably hipster, whether or not adult audiences will want to watch thirteen-year-old Hiro Takachiho and his self-built robot bodyguard Baymax remains to be seen; consider that we’ve already got Iron Man, who flies around blowing shit up from inside his robot bodyguard which is run by his robot butler. Who is named Jarvis, for pity’s sake. Add all of that to the fact that Iron Man is played by the Human CharismaBot – I’m sensing a trend here –  Robert Downey Jr., Big Hero 6 will face an uphill challenge into the hearts of a world which might well have all the heroes they really need.