Synopsis for Monsters sequel is released 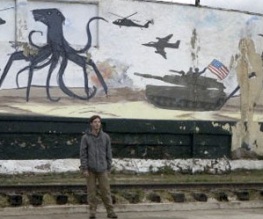 Micro-budget indie sci-fi romantic road movie… thing Monsters was universally acclaimed when it came out way back in 2010, and although director Gareth Edwards has gone onto bigger and more lizardy things (like the Godzilla reboot) it isn’t stopping Vertigo from pressing ahead with a sequel. Why do people always do this?

Set seven years after the original film, in which half of Mexico was a designated ‘Infected Zone’ full of giant squid bastards, Monsters: Dark Continent will see humanity fighting to survive in the face of the rapidly spreading alien hordes. The first synopsis has now been released, and it sounds… oh gosh, we suppose it sounds alright. Ish.

Seven years on from the events of Monsters, and the ‘Infected Zones’ have spread worldwide. Humans have been knocked off the top of the food chain, with disparate communities struggling for survival. American soldiers are being sent abroad to protect US interests from the Monsters, but the war is far from being won.
Noah, a haunted soldier with several tours under his belt, is sent on a mission: an American soldier has gone rogue deep in the Infected Zone, and Noah must reach him and take him out. But when Noah’s unit and transport are destroyed, he finds himself with only a young and inexperienced cadet for company – the brother of the man Noah has been sent to kill.
The two soldiers must go on a life-altering journey through the dark heart of monster territory, accompanied by a young local woman to guide them. By the time the three of them reach their goal, they will have been forced to confront the fear that the true monsters on the planet may not be alien after all.

Look, we know virtually everyone went mental for Monsters, but doesn’t this just sound a bit derivative and dull? Take two spoonfuls of Heart of Darkness, an admittedly well-disguised dollop of Avatar and a huge effects budget (in marked contrast to the stripped-down and aesthetically triumphant original), and what do you get? A by-the-numbers thriller in which, we’re guessing, the monster-ridden areas turn out to be ecologically regenerating thanks to the absence of our horrible little virus of a species. OOH BAD HUMANS BAD NAUGHTY HUMANS THANK GOD FOR THE CALAMARI TWATS. Yawn.

Are you sold on Monsters: Dark Continent? Go on, whinge at us below.