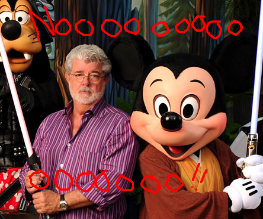 In a shock move, Disney has bought out Lucasfilm for an estimated $4.05 billion dollars. Included in the deal were detailed treatments for Star Wars Episodes VII, VIII and IX, which Disney immediately announced are actually happening. The first of the new trilogy, Star Wars Episode VII, is already in production and set for release in 2015, with plans for subsequent movies every “2 to 3 years“.

The unholy matrimony between Disney and Lucasfilm, understood to be a sign of the End Times, has been warmly received by George Lucas himself, who has thrown his full support behind the merger (although who knows what he’s thinking behind that beard).

If we are to find any good news about this travesty at all, it is that George Lucas is being kept the hell away from the set, having already produced the treatments and stories of the new Star Wars trilogy, which Disney have now appropriated and set their own storm troopers upon. He will also be the creative consultant on Star Wars Episode VII, thus fulfilling his destiny that Irvin Kershner set before him in Star Wars Episode V: The Empire Strikes Back.

Considering the huge sigh of relief the world let out after it was announced that Indiana Jones 5 was no longer happening, it was only a matter of time before karma came back to bite us on the ass.

In a statement to truly horrify, George Lucas said;

“We have a large group of ideas and characters and books and all kinds of things. We could go on making Star Wars for the next 100 years.”

The video of the merger announcement is below, and resembles less the signing of a financial contract, and more the moment in Star Wars Episode III when Hayden Christensen kills all those younglings. Poor George Lucas looks miserable:

The worst idea since the Star Wars prequels, or the invigoration of a much-deserving franchise? Leave your thoughts below!