Eddie Murphy writing film about aliens, for some reason 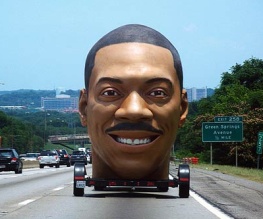 Eddie Murphy, star of alien flicks Meet Dave and Pluto Nash (as if we had to remind you), is picking up the pen himself to script a sci-fi abduction comedy. The comic-turned-actor claims the inspiration came from his upcoming ensemble film, Tower Heist, which stars Murphy alongside Ben Stiller, Casey Affleck and Matthew Broderick.

Murphy claims that Tower Heist was initially intended to be an ‘all-black Ocean’s Eleven‘ (we had been thinking there was a gap in the market for that) starring the likes of Chris Rock and Tracey Morgan. Accordingly, Murphy’s script – tentatively named Jamal and Tyrell and Omar and Brick and Michael’s Wack-Ass Weekend – is an all-black ensemble comedy that tells the story of a ‘group of guys who get abducted by aliens on the way to the fights’. On the way to the fights? Why is that significant, Eddie? Why?

Well it certainly sounds intriguing. Although we’re a bit concerned that the working title might be taken already. Someone better check that out.

Previous: Bill Murray to join another film that isn’t Ghostbusters
Next: Puss In Boots claws its way to US top spot