Emma Thompson gets her bad witch on for Beautiful Creatures 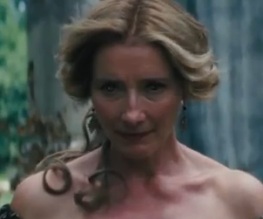 Emma Thompson is one of nicest ladies in the world, right? We can all agree on that, can’t we? She seems so nice! She’s the kind of lady who would offer you a tissue if you sneezed, or go into a burning building to save your cat. That is Emma Thompson all over. So why, why is that she has been chosen to star as some massive evil witch in Richard “P.S. I Love You” LaGravenese’s upcoming film, Beautiful Creatures?

“Hey guys, we’ve got this part of a soul-sucking sorceress coming up – who do you think we should look at?” “How about Julie Walters?” “Hey great shout but she’s not evil enough. Emma Thompson?” “Emma Thompson! Of course! I was going to say Abigail Breslin in Little Miss Sunshine but Emma Thompson is the obvious choice here. Get her on the phone.”

The point is: here’s a trailer for this Beautiful Creatures film – based on the popular young adult book series as most things are these days – and Emma Thompson is in it getting all Southern and bitchy. Watch for yourself and you’ll see what we’re talking about.

Well this looks a lot like a Twilight thing doesn’t it? Twilight with more Southern accents and more Emma Thompson and ever so slightly less powerful gazing. It looks OK? At least there is stuff actually going on in the plot, and Jeremy Irons is there. Although what’s with the fact that the teenage love interest boy is fifty seven years old? And what about that bit where Emmy Rossum takes off her sunglasses? What’s going on there?

Emma Thompson, obviously, being a good person and a fine actress, will no doubt be delightful in this. But we can’t shake off the feeling that this could be the beginning of a terrifying new era in all our lives in which Emma Thompson starts to play only evil characters. Guys, what if she becomes the new Christopher Lee? We can’t handle that! DON’T LEAVE THE SIDE OF THE LIGHT, EMMA THOMPSON. WE <3 YOU EMMA THOMPSON.

Beautiful Creatures is out in the UK on the 13th February 2013.