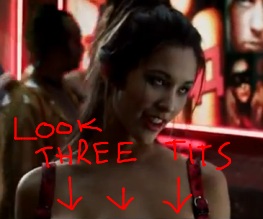 The first full-length trailer for Len ‘it’s not a Total Recall remake’ Wiseman’s Total Recall remake has hit the web, and after the frankly disappointing teaser we’re finally given a decent look at Colin Farrell desperately trying to fill Arnold Schwarzenegger’s massive, sex-offendery shoes. And by that we mean “we’re finally given a bit of a glimpse of the woman with three tits.”

This Thursday is officially MADE.

Okay, we’re officially semi-excited. It’s good to see a bit more of the festering resentment which leads Dennis Quaid (Farrell) to seek out shadowy memory-revision company Rekall, and we can confidently expect that the back of every seat in every multiplex in the land will be lovingly greased with adolescent semen when Kate Beckinsale and Jessica Biel go head-to-head. ALSO, did you know that this is the first film ever in which coolest men alive Bryan Cranston and Bill Nighy both appear? If they don’t conclude the film with a climactic wrestling bout we’re calling bullshit.

Against our better judgement, we’re also quite stoked (do people still say that?) about the hovercar chase. It’s like the glory days of Attack of the Clones all over again! </sarcasm>

Do you wish you had three hands? Tell us what you’d do with them below!

Previous: Orange(Wednesday)s and Lemons #76
Next: Explosive new trailer for Looper