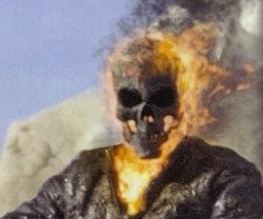 Courtesy of Empire – you can tell because they’ve stuck captions and orange gubbins all over the shop – the first photos from forthcoming nonsensical sequel (nonsensequel?) Ghost Rider: Spirit of Vengeance have hit the net.

We hated Ghost Rider, obviously (we are, after all, polycellular beings), but if anything can save the hopelessly kitsch ‘Nicolas Cage plays a demonic biker whose head’s on fire’ motif then it’s Idris Elba as a leather-clad alcoholic French monk. Click on the pics for biggification: Apparently, Ghost Rider: Spirit of Vengeance will feature Johnny Blaze (Cage) hanging out in Eastern Europe whilst he tries to make a hat last more than five minutes. However, he must return from exile to face off against the Devil (Ciarán Hinds), who intends to possess Blaze’s son. Drive Angry, much? On reflection, this may be beyond even Elba’s powers…

Ghost Rider: Spirit of Vengeance will annihilate cinemas in February 2012. There is literally nothing we can do about it.