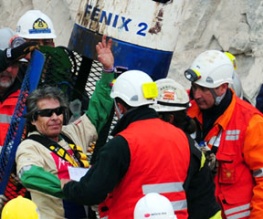 It was only a matter of time. Almost a year after the Copiapó mining disaster trapped 33 Chilean miners underground for an astonishing 69 days Black Swan producer Mike Medavoy has struck a deal with ‘Los 33’ to turn their ordeal and astonishing rescue – which was watched live by one billion people worldwide – into a film.

Although no studio has openly showed an interest in the project, Medavoy (who was raised in Chile) has committed his Phoenix Pictures to the venture. The Motorcycle Diaries screenwriter José Rivera is also working on a draft script.

That’s all for now – we’ll leave you to come up with possible names and so on. It’s a dreadful shame Buried is taken, isn’t it?