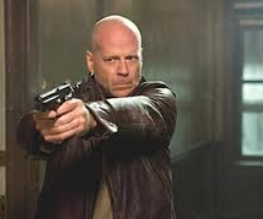 Bruce Willis, Ryan Philipe and Curtis “MOTHERF*CKER” Jackson, together at last. They’ve joined forces to star in what looks to be an utterly bland, cliche-filled heist flick full of crashes, bangs, guns and phrases like “revenge never sleeps”. Yay.

So, the plot goes thusly – a group of thin-lipped, burly chested mates decide to try and pull off a diamond heist, but on the job one of them (Phillipe, apparently now pronounced Phillip-pea) gets trigger happy, ends up killing someone and skedaddles with the loot. When big boss Bruce Willis rolls around asking where his money’s got to, it’s up to Fifty Cent to track down the traitor. It short, it looks very serious, very silly and Bruce Willis is more bald than you can possibly imagine. Take a look:

Didn’t we tell you? Well, PhiliPEA and Willis have proved time and again that they’ve got some chunky acting chops, so perhaps it’ll all be OK. (It won’t, of course, but at least this way Fiddie won’t come round our houses…)