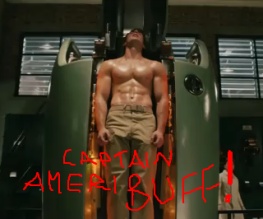 FINALLY! Of the four big superhero films in 2011, two – Thor and Green Lantern – were fairly free and easy with their trailers (we’ve even got an extra one for Thor, look!), and even X-Men: First Class came through with the goods last month. Only Captain America: The First Avenger has been holding out on us, and now the wait is over!

Watch the trailer, taking time to pop a tea towel on your keyboard to protect it from drool:

Right, first impressions? Other than OMGZSOBUFF, obviously. We’re particularly impressed with Chris Evans’ convincingly scrawny pre-Serum body, and as usual we’re thrilled to see Stanley Tucci (why has he never played a fugitive German scientist before?), Tommy Lee Jones (being all butch and wearing a hat) and Hugo Weaving (ever). And that girl whose name we’ve forgotten, she seems nice. And he PUNCHES a SUBMARINE! OMGZSOBUFF. That is all.

Captain America: The First Avenger is BUFF. And due out in cinemas on July 29th. And BUFF.