First trailer for Snow White and the Huntsman 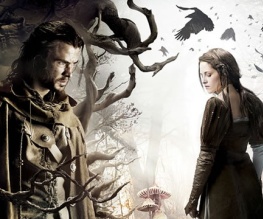 Hot on the heels of the new banner poster for Snow White and the Huntsman comes the first trailer for the film. And it’s amazing (maybe). We all know this film is going up against Tarsem Singh’s Snow White film, Mirror, Mirror, starring Lily Collins (who recently appeared in John Underwood’s Favourite Film of the Last Decade, Abduction) and Armie Hammer. But the real question is: WHICH FILM SHALL PREVAIL?? Have a look at the trailer below and let us know your thoughts.

So what do you think guys? Charlize Theron is cool, right? She’s doing a bit of a funny accent but she’s still kind of cool, especially when she turns into ravens (that is SO the video for Frozen by Madonna). We like it when she’s all “I need someone who does not fear the forest” (the forest btw – doesn’t look all that scary) and then someone’s obviously like, “How about Chris Hemsworth? That’ll work”. Presumably because he’s good at doing a slightly off English accent, having long hair and wielding heavy weapons. Look at him wield those axes! Superb double axe action.

Sadly, this film seems to be doing that annoying child-friendly thing they did in Twilight where when people get killed, instead of spurting blood and stuff, they just shatter into loads of little pieces of metal. THAT’S NOT SCIENCE. Kristen Stewart stop being in films that do that, please.

Things we liked: 1) the mirror guy – he was cool, right?! 2) Charlize Theron having a bath in that white stuff 3) the double axe action

But, seriously, where are the dwarves?? WHERE ARE THEY???

Previous: Top 10 most unfortunate celebrity fragrances
Next: There is a film called Hero Hitler in Love